Most gardeners understand and recognize the design concept of balance when gazing at a formal landscape. If there is a dwarf blooming tree in one corner of a square or rectangular garden room, there is the same plant in the other three corners. A tall, narrow shrub standing sentry on one side of a gate, arbor or entryway will have its match directly on the other side. 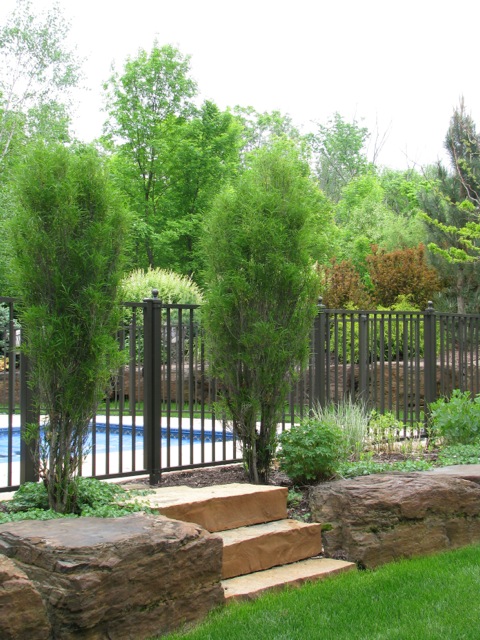 Balance in formal design is as simple as placing plants symmetrically.

Yet creating balance is just as important in informal landscape design, while also more difficult to achieve. Instead of a formal design where one half mirrors the other, one must judge what I call the “visual weight” of the various plants chosen and placed throughout the informal landscape.

It’s a difficult concept to describe solely in words, but simple to explain with photos, so I’m going to use three photos and describe what’s creating the balance in each: 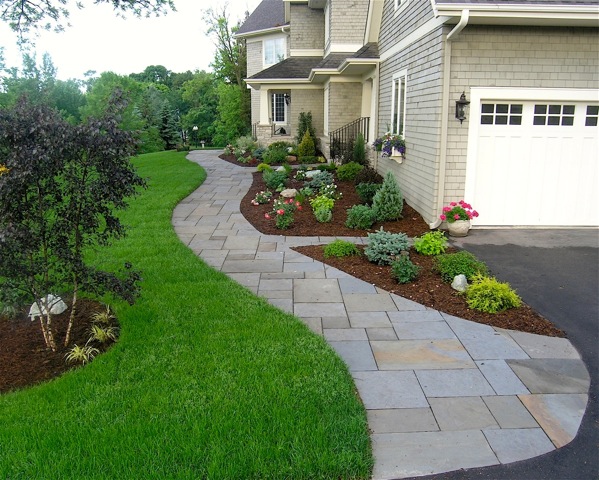 Here’s a house foundation landscape with plenty of snap and sizzle, but all this action takes place on the right-hand side of the walkway.  If green lawn were the only element on the left, the view would be out of balance. So I added the island bed on the left featuring a clump birch, grasses and perennials. The birch’s visual weight via color and height, now and as it matures, in addition to the size of the oval island bed (extending out of frame), balances the view. 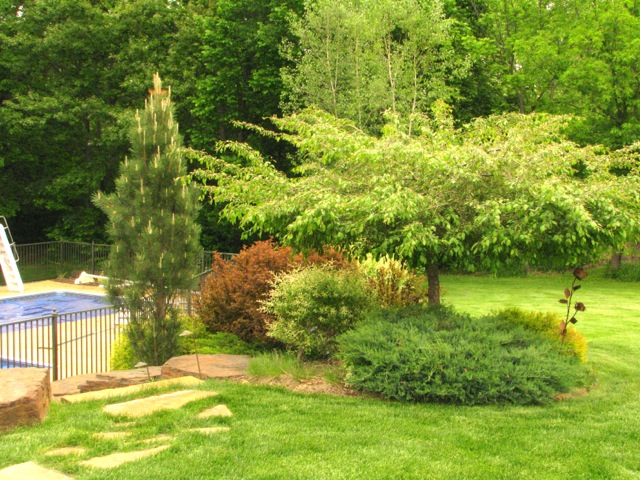 Visual weight cares not about equality in form. In fact, mixing and matching plant forms makes a landscape more compelling.  In your mind’s eye, remove the pyramidal pine on the left from the scene. The spreading, weeping crabapple (‘Louisa’) would still look lovely, but the remaining shrubs don’t provide enough weight to balance the scene.  The pine, even with its starkly different form, does.  A tall clump birch (top center) is at the end of this long, curving bed, and adds a nice third element. 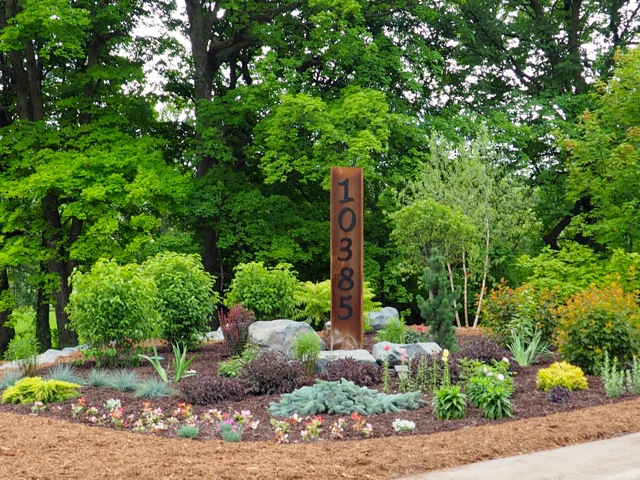 Here’s a lively driveway entrance bed we created in this summer.  The commanding I-beam address marker thrusts upward from the center, but that’s the only formal element. Does it look balanced? I believe it does (note that the three-trunk Whitespire birch about a third of the way in from the right isn’t in the bed, it’s actually 20 feet beyond, but doesn’t hurt). Here, I’m also balancing colors. The gorgeous prostrate blue spruce (‘Procumbens’) gives a huge whiff of blue, so I countered with the swath of festuca ‘Elijah Blue’ to the left.  The low-growing form of weigela that snakes in front of the I-beam struts burgundy, so that color is dashed elsewhere via the upright barberry to the left of the largest central boulder.

Now note the three commanding gold-yellow touches: juniper ‘Daub’s Frosted’ in the left foreground, chamaecyparis ‘King’s Gold’ right foreground, and the Tiger Eye sumac peaking out on both sides of the I-beam. They create a triangle, the oldest landscape design trick in the book.