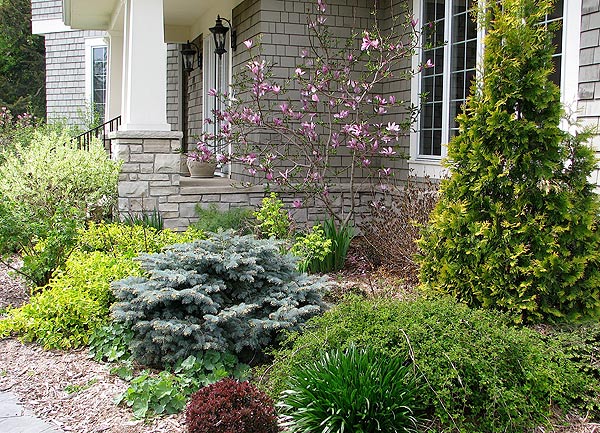 The answer I hope you can give is, “all!” although a confident “many” will do. Learning to create plant combinations with an eye toward the overall shape of each plant is a key design skill crucial to advancing your landscape to higher levels of intrigue and beauty. Yet shape – more properly, “form,” when referring to a plant – is perhaps the least understood and appreciated component to garden design.

Placing plants, remember, is all about creating contrasts. Mixing up a pleasing pallet of bloom colors is Level 1, typically the first design concept new gardeners comprehend and play with, when their only goal in life is creating a pretty flower garden. As you advance, you should stumble upon Level 2: The realization that foliage contrast (leaf shape, size, texture, color) is hugely important – more important than flower color contrast, since the perennials’ foliage exists in the landscape all season (the trees and shrubs, all year) while the bloom color comes and goes.

Which brings us to Level 3: Creating contrasts in plant forms. Here are the forms you have to play with:

Spreading – Low-growing, spreading much wider than any height achieved. Examples of spreading perennials would be groundcovers such as Lamium, Ajuga, and the stonecrop Sedums. Spreading shrubs include many varieties of ground-hugging Junipers. Don’t be thrown by plant descriptions using “spreading” as the second label, as in “upright, spreading” or “mounded, spreading,” which describe plants, usually deciduous shrubs, that may grow, two, five, ten or more feet tall with branches that grow outward to equal or greater width (Sumac, genus Rhus, is one).

“Spreading” may also be sprinkled in to describe a plant of any form that expands from the base via underground stolons each season. Dwarf Bush Honeysuckle (Diervilla lonicera) is described as a “fast-growing, spreading shrub,” even though its form is rounded. By “spreading,” what the catalogue writers mean is it expands via underground shoots to quite rapidly fill a larger and larger area. The perennial Snow on the Mountain, or Goutweed (Aegopodium podagraria), or, my name for it, Devil’s Semen, is a grand example of a spreading perennial in every sense of the word.

Mounding – The foliage creates a mound shape, always wider than tall. Think of the top half of a circle. Mounding perennials include Chrysanthemum, Heuchera, Hosta, and Astilbe (in bloom, the flowers may rise on vertical stems held above the foliage, but it’s still a mounding perennial). Classic mounding shrubs would be most Spirea varieties, and the evergreen Dwarf Mugho Pine.

Rounded – Now visualize the full circle above ground. OK, it’s rarely close to a perfect circle; the key concept is the plant gets wide in the middle. Few perennials can be described as rounded; Ligularia dentata ‘Desdemona,’ I suppose, or perhaps a kempt Peony. Azaleas are rounded, as are many Barberry varieties, some Dogwoods and most Hydrangeas.

Upright – Always taller than wide, the overall impression is one of vertical growth. Width remains fairly constant from base to top. Chelone (Turtlehead), Delphinium, Iris, Hibiscus and the tall grass Molinia ‘Skyracer’ are popular upright perennials. Fothergilla, Ninebark and Serviceberry are upright shrubs; upright trees include Elm varieties Accolade® and ‘Frontier’ plus Magnolia varieties ‘Ann’ and ‘Ricki.’ Upright evergreen trees include Douglas Fir and Norway Pine. Many Arborvitae varieties are uprights (‘Holmstrup,’ ‘Rushmore,’) though, in the evergreen shrub world, the difference between upright and columnar sometimes escapes me.

Columnar – Upright and narrow (think of a column). Most often used to describe evergreen trees and shrubs. You’ll see a Rushmore Arborvitae described as columnar one place, upright in another. Juniperus virginiana ‘Taylor’ is a classic columnar shrub, growing fifteen- to twenty-feet tall while maintaining a three-foot width.

Pyramidal – Applicable to the crown form of many deciduous trees, and the overall form of many evergreen trees and shrubs. Think of the Christmas tree or pear shape.

Weeping – What goes up must come down. Weeping form is found in both deciduous and evergreen trees. The leader of the tree bends over and starts growing horizontally or vertically or both, with branches following suit. Or, the leader may maintain a vertical thrust while everything else drapes and droops. A lovely weeping ornamental tree is the crabapple (Malus) ‘Louisa’. The pine ‘Uncle Fogey’ (Pinus banksiana ‘Uncle Fogey’) is one of my favorite weeping evergreens. The weeping larch (Larix decidua ‘Pendula’) is another grand, small weeping tree.

NOW – start seeing the form of what you plant. You say your perennial garden has bloom spring, summer and fall? That the flowers are a dazzling combination of whites, pinks, blues, yellows and a dash of red? Except every perennial is mounded? Dear, dear. Add at least two additional forms.

It’s when placing small trees and shrubs where opportunities for contrast in plant form are most important. A single columnar evergreen or three rocketing upward from a landscape of rounded shrubs brings both forms into focus. Mounded shrubs cascading across a slope need upright, columnar and pyramidal plants dashed across the scene to add form contrast. Taller shrubs and small trees, evergreen or deciduous, should be planted from bottom to middle of a hill (not on top) so that the perennials and smaller shrubs on the hill, and the hill itself, serve as backdrop.

Stay away from columnar forms at the corners of your house – all you are doing is mimicking the vertical straight line of the house structure. Upright, spreading and pyramidal forms will better soften this harsh vertical line. This is true also in corners where the structure comes forward, such as a house with a jutting garage. Soften this inside corner with a large shrub or small tree offering upright or rounded form. In foundation plantings, columnar and pyramidal evergreens look best with a full section of exterior wall as the backdrop. This placement helps their form stand out.

Weeping forms are best as singles. A stand of weeping pines, or a flock of weeping crabapples, is too much of a good thing. Weepers are sculptures. Michelangelo’s sculpture “David” is placed so he stands very much alone. The weeping form is exquisite in proximity to a waterfall or fast-running stream. The weeping form of the plant suggests the form taken by the water. Old landscape designer trick.