Getting My Head Around Homer

Alaska gardeners are short on heat, but long on passion and expertise 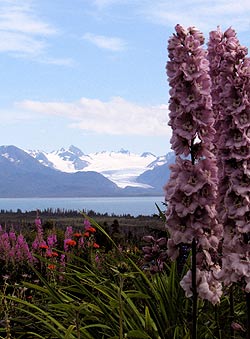 8-22-09 – As the plane dropped below dense cloud cover and Anchorage finally came into view, everyone onboard began craning their necks to look out windows on each side of the plane, myself included. My first glimpse of Alaska! And the first glimpse for the other 158 passengers onboard, apparently. I realized that my flight from Seattle was crammed with tourists. No one, it appeared, was an Alaskan returning home from a junket “outside” (an Alaskan’s telling term for Canada, the lower 48 states, Hawaii, and the entire rest of the planet).

Made sense. As I would understand more clearly over the next several days, if you live in Alaska, you don’t leave during the summer. If you ever leave at all.

With a one-hour layover before boarding my connecting flight to Homer, I wandered into the fine little bookstore within the sleek Anchorage airport, and quickly came to realize what all tourists visiting Alaska come to realize: At some point during my visit, I will be killed and eaten by a bear. One’s only prayer is that these two events occur in that order.

Certain Death By Bear was driven home to me while perusing the books lining the shelves in the “Local/Alaska” section of the bookstore, where one may choose from the following titles: 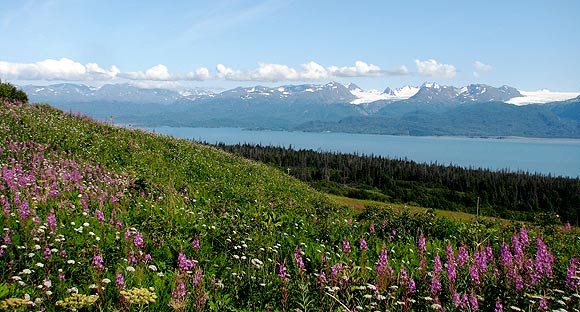 To hell with sodas, neck pillows and reading material, is there a shop that sells big guns and ammo?Perhaps I should stay away from the books—it’s only a half-hour flight to Homer—and buy a local magazine instead. A nearby rack features the July/August issue of Alaska magazine, slick and thick, on the cover the smiling face of an attractive, middle-aged woman. Then I realize she must be the subject of the glaring cover story: “SURVIVOR! Petra Davis Reclaims Her Life After a Bear Nearly Killed Her.” 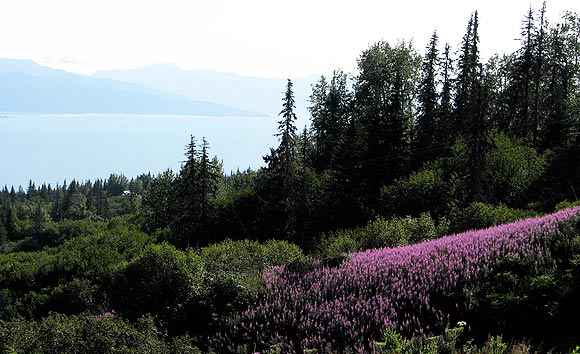 View from the Adams residence back yard.

I’m in Alaska because last winter some nice people representing the Homer Garden Club had e-mailed to see if I would be the guest speaker kicking off their third annual Gardener’s Weekend, August 1 & 2. Not much to ponder about that proposal. They’d flown me from Minneapolis as far as Anchorage, with the connecting flight to Homer, so I decided there was no backing out now.

The flight from Anchorage to Homer is a little twelve-seat turboprop, and even though we take off at 9:30 at night, once we gain altitude to 3,000 feet out the window I can see clearly across probably 500 miles, the vast Cook Inlet, cargo ships, mountains, mountains, mountains. It’s not quite dusk. 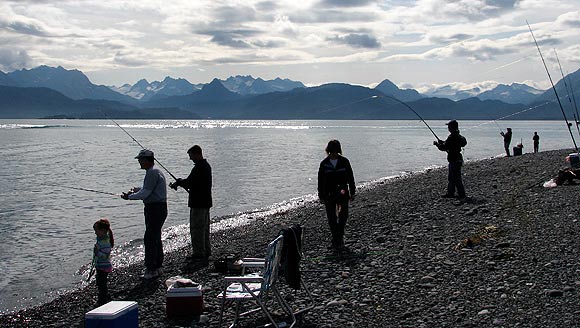 Public fishing at the Homer Spit.

Alaska state motto on license plate: The Final FrontierPicking up my rental car at the…quaint Homer airport, I fill out the rental form, declining additional liability insurance, accepting the damage insurance, then initial at the bottom of a separate, stern form telling me that I will be charged two hundred and fifty dollars if I bring the car back smelling of fish.

Adams Residence
From the questions and comments after each of my two Saturday talks to the lively, good-natured gardeners who had gathered for the weekend, some of whom had driven from as far away as Willow, north of Anchorage (what’s 300 miles to an Alaskan?), I sensed a very high level of gardening acumen and experience, and, as always, knew that over the next few days I most certainly would be learning a thing or two.

The tour of six gardens was scheduled for Sunday afternoon, but gardeners being among the most gregarious folks on earth, I was invited to stop by several gardens on Saturday that were not on the tour. The first garden I visited was created by Brenda Adams, a marvelous blend of color, form, texture and artful accessories.

Garay Residence
Early in the evening I arrived at the home of Teena Garay, another extremely accomplished gardener whose prior residence (also in Homer) had been featured in Horticulture magazine. Along with other members of the Alaska Rock Garden Society, Teena traveled to China several years ago with famed plant collector (and Heronswood Nursery founder) Dan Hinkley on a seed collecting trip, the reason why her garden features varieties of Spirea, Hydrangea, Rodgersia, Meconopsis, Incarvilla and other plants I’d never seen before.

Moose, as I soon learned, are the number one critter problem for gardeners in Homer (and across much of Alaska). What moose can do to a garden makes deer damage seem trivial. Deer eat rose blossoms; moose eat the entire rose bush to the ground. Gardeners in the lower 48 become tearful when they discover that during the night, a deer nipped off some of the tulips. In Alaska, Moose will eat your trees, shrubs, perennials, lawn grass, bird food, bird feeder, and just about anything in a garden not made of ceramic or stone. Which is why most of the gardens I visited were bordered by heavy-duty, seven-foot tall moose fence.

Even though I was safely ensconced in my familiar Zone 4, I kept seeing the unexpected—giant heuchera that more resembled specimens I might see in Seattle’s Zone 7 than the meager specimens I coax to life each summer in my Minneapolis Zone 4. Delphiniums skyrocketing six or more feet tall, pulmonaria, ligularia, and perennial geranium on steroids. 70 degrees is about as hot as it gets in Homer in summer, with a growing season totaling 75 days, in a good year. Not only that, but Alaska has the weakest sunlight of any of the 50 states. One thing you won’t find at the local Walgreens is sunscreen. What in blazes was going on?

Clyne Residence
So now I’m thoroughly befuddled. Undaunted, I enjoyed the grand mixture of shrubs, small trees, perennials and wildflowers up next:

“You should have been here in mid-June,” a fellow tour mate remarked at some point. “A lot of us don’t even sleep. You can garden all night, if you want to.” Ah, of course. In Homer, June 21—the summer solstice—features a whopping 20 hours of sunlight, ample time to get the chores done. It all started making sense. Even last night, the final day of July, I had been shooting decent garden photos at 9:30, without use of a flash.

In the lower 48, we’re used to the sun setting, as in going bye-bye, off and away to the other side of the planet, where it brings morning to China or Australia or whatever countries lie opposite. In Homer, in summer, the sun doesn’t really set, it ducks behind the mountains for a quick cigarette, its orb out of sight but its rays still dancing overhead.

Dungan/Carroll Residence
Sculptor Paul Dungan’s studio is on the grounds, and his sculptures add focal point throughout.

As I get to know more people on the tour, I begin to see what a club they form. Not a private club; whether born in Alaska, or a relative newcomer, if you’ve made the plunge, you’re an Alaskan, and I sense that acceptance of those who arrive from “outside” to take up residence comes readily. There are only two scenarios whereby one moves to Alaska: after a great deal of thought, or on a whim. Either way, you need to be a certain type of person, adventurous, confident, self-supporting. You need to be assured, and you need to be strong. Telling family and friends that you are moving to Alaska, after all, is a rather stern goodbye. You probably won’t be popping back to Des Moines for your niece’s high school graduation.

So what you get is a great gaggle of independents, paradoxically drawn to each other by the singular trait of non-conformance. I ask a woman in her mid-30s where she had moved here from. Colorado, she replied. Interesting, I said, noting that Colorado is not without its charms. Too many people, she said.

Reinhart Residence
I keep forgetting to mention that many of the gardens featured vegetable patches, both large and small, featuring robust lettuces, chard, brussel sprouts, snow peas and other cool season crops. I also should mention that proximity to the sea keeps Homer warmer in winter than most northern states in the lower 48—temperatures rarely dip below zero. Successful experiments growing Zone 5 plants abound.

Fell Residence
At last, some dwarf evergreens! Most of the gardens on the tour featured fabulous perennial beds, but with such a long winter I know that if I gardened here I’d use ample small trees and shrubs, particularly evergreens. Something to add structure. Sculptural dwarf pines, especially, since only the scruffy Lodgepole pine is native to Alaska—spruce, cedar and hemlock dominate the wild. Though to counter that opinion, I suppose that when the gardening season is less than three months, you want your summers filled with as much bloom color as possible, and I see that side of the argument also. This garden featured a series of small gardens and numerous unusual conifers, photographed, unfortunately, as I was running short of space on the second of two huge photo cards! 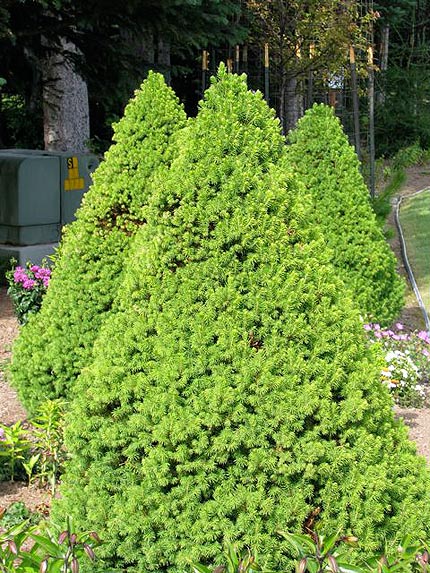 This amazing day concluded with a reception at Bear Creek Winery and Bed and Breakfast, where we all met up for appetizers and bountiful amounts of wine. This is also where I stayed while in Homer, and it’s fabulous—charming host, delightful accommodations and beautiful gardens.

And far too short a trip. I was in Alaska a grand total of 48.5 hours (the curse of operating a landscaping company in summer). Really stupid, I know. But I’ll be back. We all want to go to Alaska. If you go, fly first to Anchorage, rent a car, and hit Homer and the rest of the towns on your way down the peninsula.

Denali and Mt. McKinley can wait. Half the time, you can’t see a thing for the cloud cover, anyway. And once you get inland, the bears really have the advantage. Word is, they don’t attack, they wait for you to freeze to death, then suck on you frozen.