No Update Until the Big House Swings 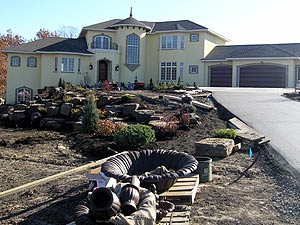 10-31-06– About the only thing giving me hope this weekend is that the nice landscaper doing the work at the house next door – four acres away, we wave – just started getting his shrubs in today. Heck, ours have been in for three weeks.

But there is much left to be done, and until the irrigation is completed, the sod laid, the stonework swept and washed, the mulch primped and the Bobcat loaded on the trailer, I’m going to have to delay future updates.

We should be at it about another week, not too bad, considering we started landscaping this new home in the far Northwest suburbs of Minneapolis on August 28th. There was no driveway when we started (it just went in October 26th), final grade had not been established, and I was dealing with a magnificent home placed sideways into a hill requiring more than a little stone retaining work. 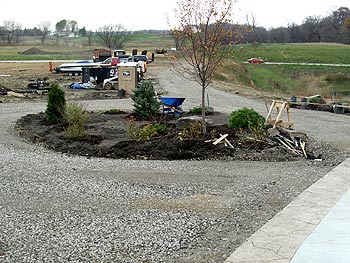 Luckily, the clients are sweethearts.

Here are some additional pics. After I finish this one, give me, oh, one three-nighter in Vegas and about three weeks after that to get back to the point where I can at least spell my last name, then I’ll resume full updates. How does December 1 sound?