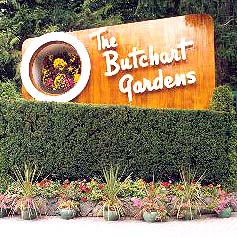 9-29-03 – An unexpected opportunity to spend a few days in Vancouver, British Columbia came my way, so on September 17, I flew to Canada’s West Coast, picked up a rental car at the luxurious Vancouver airport, and made a beeline for the famed Butchart Gardens. I’d always heard great things about Butchart (don’t fancy-up the pronunciation; it is properly pronounced “Butch-ert”) but had never found time to visit, so I was psyched.

Vancouver is one of the world’s great cities, a large, diverse international seaport bounded by the Pacific Ocean and the enormous Vancouver Island to the West, and the Rocky Mountains to the East. This was my fourth visit, and I must say that if I could choose any city in the world in which to live, Vancouver would be on my short list. It’s a fantastic gardening town, USDA Zones 7/8, which allow, among other things, for more than two or three shrubbery choices when it comes to growing a decent deciduous hedge.

Vancouver has a great theater and music scene, fabulous restaurants, lovely, friendly people, and a relaxed atmosphere that belies its size. Traffic is hideous, but there you go. You live up north of town. Best of all it’s in Canada, a country that understands the great joy and ease of practicing commerce aided by one- and two-dollar coins, something Americans have never quite figured out.

I drove twenty-five minutes from the airport to the Tsawwassen-Swartz Bay ferry, drove on board along with 200 other cars, then enjoyed the sublime ninety-minute cruise through the Gulf Islands to Vancouver Island, BC.

Ferry travel is a unique and exciting mode of transportation when you’re a landlocked Midwesterner. These boats are huge, sporting lovely lounges, coffee shops, cafeterias, even children’s play areas and video arcades, scattered through three levels. In the bowels of the boat as you travel is your car and hundreds of others, and whereas I was acutely aware of the dozens of ferry disasters occurring each decade around the globe, concern for my safety never entered my mind. This was a ferry in Canada, after all, the safety capital of the world, not some rusty, dilapidated tub in Eurasia. I wasn’t about to be flung into the freezing waters of the northern Pacific Ocean because the goat herd shifted.

But I digress. From the landing at Swartz Bay it was just a twenty-minute drive through the rustic and charming countryside to The Butchart Gardens. 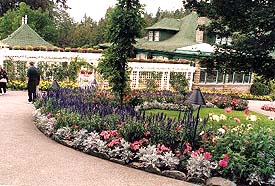 One of the oldest public gardens in North America, Butchart was founded in 1904 by Jennie Butchart, wife of an early Portland cement manufacturer. Her hubby had quarried the hell out of a western portion of central Vancouver Island during the turn of the century, and Jenny made it her life mission to beautify the scars. 99 years later, Butchart Gardens is living testament to her grace, goodwill, and exquisite taste.

Butchart is not large, only fifty-five acres, meaning that at a steady clip one can see every corner and walk every path in about two hours. I spent three, about the right amount of time to do it justice. I did the whole tour backwards, naturally, starting with the Italian Garden, for I had heard that the Sunken Garden, which one would normally encounter early on, was the highlight of the tour, so I saved it for last. 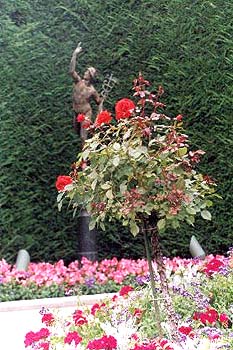 Off next through the large Japanese Garden, a shady and mystical portion of Butchart featuring marvelous use of dwarf conifers, blooming shrubs, and ornamental trees, including all those Zone 5 through 8 Japanese Maples gardeners in warmer climes are always shoving in our faces.

The formal Rose Garden is a heady experience, the perfume from 500 or so tea and shrub roses as impressive as the view. I stopped at a gazing globe to snap the self-portrait show here. It was a cool and cloudy day, good for photography, and the picture came out well, even if it did add several inches to my waistline.

Keep in mind I’m skipping plenty of cool stuff and cleverly designed areas for the sake of brevity in this report. The next main feature I encountered was the aforementioned Sunken Garden, comprising about one-third of the total Butchart Garden grounds. 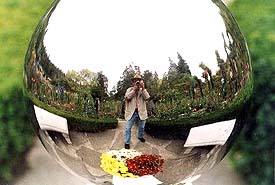 And what a site it is. You come at the Sunken Garden from above, which I’ll bet you could have figured out, but this is no two-foot drop-down into a polite little sandbox. One overlooks and then descends into a large valley, a landscaping of the original quarry, and it’s breathtaking in its beauty.

Here are a few more shots

All-in-all, a great trip. The Butchart Gardens, and Vancouver Island, are a must-see anytime you are in the Pacific Northwest. If you are ever in Seattle, take the ferry to Victoria, the largest city on the island. Victoria is an easy twenty-minute drive from Butchart, and is as charming a European-style city as you’ll find on the North American continent. It would have been great to spend the night there, but instead I shot out of the Butchart parking lot at dusk, just making the 7:00 p.m.