6-01-10 – Eighty-eight degrees at game time the other night, for those of you who may have caught wind that there’s a fabulous new ballpark in the world of baseball, Minnesota’s Target Field. The Twins are off to a terrific start and so are gardeners nationwide, so in this update I have tons of gardening news and views to report. 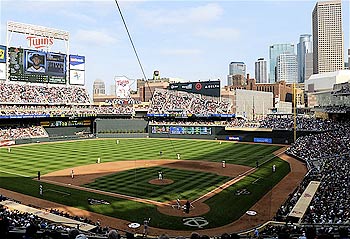 I’ll begin with this monumental announcement from the secret lair of the Renegade Gardener: Starting right now, you can sign up to receive an e-mail every time this website is updated with new content.

Just think of it…no more checking the site each month, only to discover that the next update is one day, a few weeks, or a month late. You can ignore me, in other words, go about your business, garden to your heart’s desire, and I’ll shoot you an e-mail when it is time to resume your gardening edification at RenegadeGardener.com.

My Webmaster and I will keep it totally private, of course—if you sign up for the alerts, the list of e-mail addresses stays strictly ensconced on his secret, Advanced Firewall Plus Dynamite-ringed computer, hidden away in friendly Fridley, Minnesota. And neither he nor I, your trusted servant, will ever, even under threat of torture, sell the list, lend the list, or allow its use for anything except notification to you that the site features a new update. OK, so maybe I’ll shoot you a note to let you know when the next book comes out.

Now, on to the rest of the update—hot topics, cool plants, pretty photos and hideous trends.

The Thing About Spring

I catch a lot of flack when I travel to speak at shows in winter, from normally well-mannered and cordial human beings turned caustic comedians when they learn I’m an alleged gardening expert living in Minnesota. “What do you grow there, snow peas?,” a quite well known and otherwise gracious garden designer from New York City cackled at me a few months ago, nearly doubling over with laughter at her lightning quick wit. Wow, never heard that one before, stop it, please, you’re killing me. 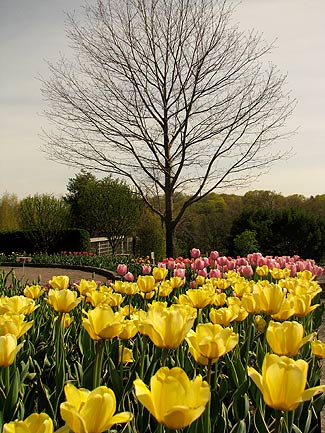 I’ve said it before and it bears repeating: Living in, and gardening through, four supremely distinct seasons gives a perspective and grit to life unknown to gardeners in Zones 6 – 9. I love the Pacific Northwest, adore the scenery in California, admire the Southwest (though a bit more greenery and water would spruce things up), enjoy visits to the Deep South and the Atlantic coast. Why, there are even a few acres of Florida to which I might voluntarily return.

But what you get in the northern zones is a true spring. If you’ve never seen it, you are missing something, something important, something vital, primal, inspiring. In April we crawl cautiously from our caves with a sense of joy and gratitude known only to plane crash survivors. We strip down to ball caps, leather boots, jeans, flannel shirts and our lighter down vests, high-five our confused and groggy neighbors, search for survivors, bury our dead, and chop our driveways clear of whimpering mammals glazed by weakening ice. Then we grab a cup of coffee, stumble into our gardens, set our butts down on a mildly cold, ornate iron bench, and witness nature do what it does only in the north: go from zero to sixty.

Sure, it’s a plodding, uneven acceleration, more akin to a 1985 Yugo than a 2008 Toyota Camry. It takes about a month. But whereas a gardener in California witnesses a year-round green-leaved shrub bloom in spring, we witness Life After Death. We get to see Earth at its beginning, to witness the Big Bang.

Here are some photos of spring in Minnesota. FYI, I sowed my snow peas on April 23rd.

Two Cool Perennials
Off my high horse, back with a few things of note for gardeners everywhere, right now it’s cool plants anyone can grow. 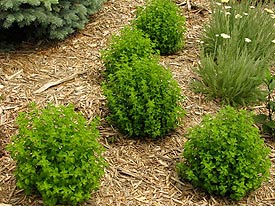 Calamintha nepeta (Calamint)
I was surprised last summer to spot this perennial for sale at a fine local nursery, surprised because calamints are universally ruled as hardy to only Zone 5 (and in a few catalogs, Zone 6). Nonsense, said Mike Heger of Ambergate Gardens, who has been growing the plant for years. It’s a slinky, petite, gorgeous perennial, not widely grown by gardeners, even though it is one of the longest blooming perennials on Earth. This is a swath of five photographed a few days ago in a client’s planting. Cold-hardy, alright. What a kempt, cute little doll. I’ll shoot photos of it in bloom in July and include them in a later update. Gardeners in Zones 4-8, give her a whirl. 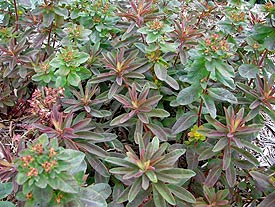 Euphorbia polychroma‘Bonfire’
OK OK, gardeners in Zones 6 – 9 may not reap the rewards of triumphing over bitterly cold winters, but they do have the world by the tail when it comes to growing colorful spurges. Here’s a shot of a newer variety also listed as hardy only to Zone 5 that, it turns out, survives and grows splendidly in Zone 4. Also photographed a few days ago, the early spring green foliage quickly turns maroon red. These are just coming into flower.

Two Cool Shrubs
An update on some shrubs I’ve mentioned prior as noteworthy: 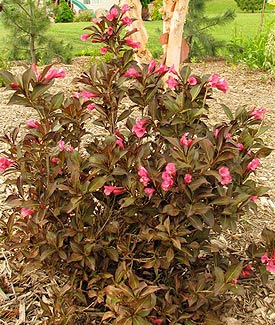 Fothergilla ‘Blue Shadow’
I’ve been waiting for this shrub to mature a bit so I could finally get a good picture of one of the great, blue-leaved deciduous shrubs available to gardeners across Zones 4-8. This is in a client’s foundation planting, and I just missed it in bloom (four weeks starting late April, lovely white bottle brushes), but who cares. Give me the blues, baby. In some of the talks I give around the country on the subject of creating mosaics of shrub textures I always mention Fothergilla, and there will be two people in the audience who have heard of it. Grow this killer, kids. 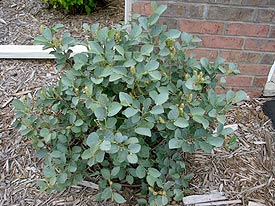 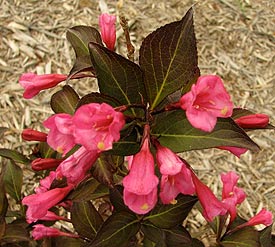 One Bad Dude
Go outside after we’re done here and take a hard, close look at your pines. No, not that one, that’s a spruce. Your pines, particularly anything fancy.

I was out a client’s a few days ago, checking some planting we did last fall, and doggone it, that’s where these photos were shot. I caught this critter very early on in the infestation, a few days perhaps. European Sawfly is a growing problem across the country. The larvae attack pines and eat emerging shoots and needles. Ignore it, and the tree doesn’t die but it looks like hell. If the infestation hangs around for several years, the trees do eventually weaken and die.

Here’s a link to a good fact sheet from Penn State.

This is why I’ve written many times, know your garden, know your trees, get out there and look closely, know what looks normal and what looks funny.

Make It Stop
As many of you know, a few years ago Frank Sinatra took control of my brainwaves (aided by Luke Perry, Dylan McKay on Beverly Hills 90210; a deceased mind-controller always requires aid of a living, future deceased mind-controller) and no amount of tinfoil inside my ball caps can wrest control away from evil ol’ blue eyes.

His demand is that I see red geraniums EVERYWHERE. I’ve written about it numerous times (click here), yet it only gets worse.

Here’s a photo from yesterday, the parking lot of a nursery I flew into to buy a case of Roundup: 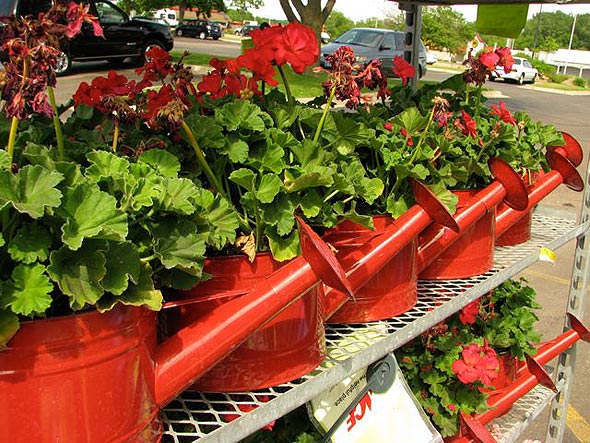 God almighty, it is a sad, sad day when I realize that the entire gardening world does not base its actions and assumptions on the kind and humble advice of the Renegade Gardener. I’ve even had some curt e-mails from readers following last winter’s rant, red geranium lovers, pointing out that elsewhere on this site I’ve stated that if you like a plant and I don’t, well, beauty is in the eye of the beholder, it’s your garden, you’re right and I’m wrong, etc.

I write stuff like that in moments of weakness. I should also point out that in the statement above, I’m referring to plants, whereas here I’m talking about red geraniums. There is no right. Sure, you can chew food with your mouth open, carry on a conversation if you like, but it’s not considered correct. You can fart really loudly during a quiet moment at church or the symphony, and, you now, it happens, but your job is to try not to do it.

And so it is with red geraniums. Yes, planting them happens, but really, there is no excuse. Note to Frank: the red watering can—nice touch.

Current Status & Updates
To newer readers, those top buttons on the left of the home page (Plant Spotlight, Top Pick, Myth of the Week, Don’t DO That) are set in Archive Mode for summer, tons of good stuff underneath them, but I don’t start adding new content until November 1 of each year. The lower buttons archive all these Current Columns, and include a lot of my newspaper and magazine work starting from the late ‘90s.

This is the Current Column, and it is updated every month in summer, sometimes lengthy, sometimes short and suggesting pertinent articles from the Archives. Then November through April I update will lengthy Current Columns and try to add to the other feature buttons. So please sign up for the update reminder, mindful that twelve months out of the year, Renegade Gardener.com burns a hole in the Internet in its quest to advance the art of gardening.