Is the Renegade Gardener Dead?

8-1-06 – Heavens no, though many early mornings when I rise to darkness and the six Advil have worn off, I feel like it. 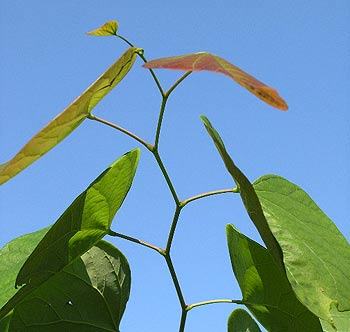 A sincere thank-you to the many comrades who have e-mailed over the last, oh, six weeks or so (you ARE getting more patient over the years) to enquire when I might be tempted to update the site. Well, you’ll get a new article here in a minute, but I do owe an explanation to all you wonderful RGs out there as to why the site has been dormant since May.

Three factors: First, work. That’s the good news. I am now running a five-person landscaping company that has clients and jobs stacked up higher than concrete retaining wall block in Blaine. For those of you readers who live outside the Twin Cities, that’s a funny line. Blaine is sort of … oh, never mind. I’ll be using some of these projects for the basis of the next, lavish update, which will be coming sooner rather than later, I swear. We take the projects one at a time, but this season they’ve never stopped, and some are bigger than previous years.

Second is baseball. I coach youth baseball, nine years in a row now, a crazy, crazy thing to do considering that six years ago I dropped out of the corporate rat race to pursue my passions for landscaping, gardening and writing. But I can’t give it up, it’s a pure and simple joy, and the past four years when I’ve been asked to coach I say “no,” and then they ask again in about a week and I say, “sure.” The Babe Ruth season (14 and 15 year olds), which began with practices in April, recently ended.

Third factor is of a personal nature, non-health related, but in terms of time and, shall we say, logistics, it too has made it difficult to devote attention to updates. And similar to a baseball game, this long, drawn-out affair will also ultimately be decided, and then it’s over. I’m thinking by about September, early October, tops.

Quick word on the material I publish on this site as “Current Column.” This material comes in two forms: About every third one is a magazine article I’ve published that is at least sixty days old, and the rights have reverted back to me. You can always recognize these articles because though fairly well written they’re not really very funny, and you can tell that I’m flogging the computer keys for pay and for some editor who isn’t going to like it if I start a sentence with, “Take a hard look at them, though, and you’ll have to admit that with the exception of about two varieties, spirea are hopeless, hopeless shrubs …”

“Proper” garden writing, I guess you’d call it. The article below is one of those. Interesting enough, I suppose, if you’re curious about dahlias.

The second type of update is where I sit and write just for the love of the site, often late at night when my mind is racing and I’m pulsing to the backbeat of Dylan, Coltraine, White Stripes, Neal Young, mid-80s NWA, the Kinks, or the like (the new Ray Davies solo album, “Other People’s Lives,” by the way, is FANTASTIC. Just saw Ray a month ago at First Ave., 61 years old, good little backup band, singing his guts out).

The photo, by the way, is one I took of one of the redbuds (Cercis canadensis Minnesota Strain) in my landscape in Deephaven, Minnesota. I thought it was kind of cool. 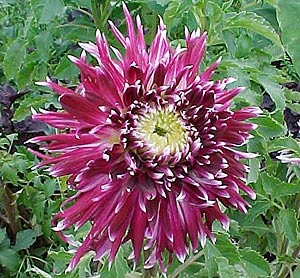 Gardening is a delicious addiction, as every gardener knows. The hobby seduces the senses one by one: the sight of colorful blooms, the sound of wind, water and wildlife, the feel of sun-warmed earth, the taste of garden grown fruits and vegetables, the heavenly fragrance of it all.

Become hooked and the craving for new gardening challenges grows. Some go the way of the water garden, while others pursue the perfect lawn, but perhaps the most common love affair for gardeners is with a particular perennial plant that has piqued their passion. You probably know one on your street, or in your neighborhood: the rose devotee, the hosta zealot, the iris buff or the daylily fanatic. Orchids, it should be noted, are one of most dangerous plants on the planet; they consume people.

There is one plant, however, that seems somehow to illicit unrivalled allegiance from its advocates: the Dahlia. Catch a glimpse of just one in bloom, and you’ll swing open a stranger’s gate to get a closer look. View the intoxicating scene of hundreds in bloom, and heaven help you. 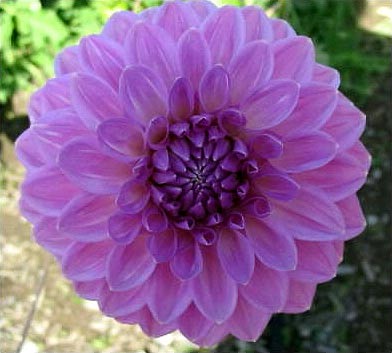 isa Ringer smiles while recalling the events that led her to eventually start Two Pony Gardens in Long Lake, one of the Twin Cities few purveyors of dahlia varieties. “I didn’t think dahlias were anything special until I started adding more and more to my garden, and saw what happens when you have beds full of them. That’s when I fell in love.”

Ringer had spent “quite a while” in the landscaping industry, and was looking for a market niche-type plant to grow. “I was burning out from creating gardens for other people, and then maintaining them. I tried growing and selling medicinal herbs, but the market for them wasn’t there,” she says. Alert to the fact that dahlias were a specialty plant not readily available to northern gardeners, she evicted the herbs from her greenhouse and began dancing with dahlias.

The market soon followed, for as she astutely points out, “It’s always hard for northern gardeners to grow big, beautiful, back-of-the-border flowers that are going to get up into the four- to six-foot tall range, but then there’s dahlias, which have these amazing, eight- to twelve-inch blooms. They are terrific for cutting. Plus they are a true specialty plant—you need to acquire a pretty fair level of expertise to grow them.” 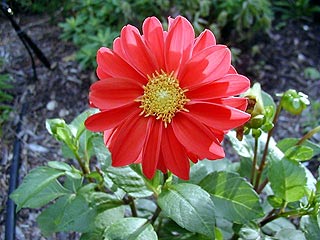 Specialty plant indeed—dahlias are one of those plants, like rhododendrons, that should come with a black-on-yellow tag that reads, “WARNING: Growing This Thing Involves Gardening.”

“I call dahlias the poodle of the flower world—dahlias have to be groomed, and attended to on a weekly basis. For some dahlia lovers, daily would be more like it!,” says Ringer. Dahlia stems are brittle, and plants can blow over and snap easily in the wind, the reason dahlia aficionados stake each plant. Disbudding is another trick of the dahlia trade. To grow proper dahlias, one needs to break off certain buds as they form in summer, so that the plant will devote its energy to a chosen few. This creates larger flowers and a plant that is well proportioned without becoming too top-heavy.

Then there’s the fact that dahlias are not hardy north of their native Mexico. A tuberous plant, dahlia tubers are religiously dug up each fall by local gardeners and stored until spring (see sidebar). Bear in mind also that despite their large blooms, dahlias will add no fragrance to your property (although as Ringer notes, “I’m grateful they have no fragrance, or it would be too much!”).

So is it all worth it? “Of course,” replies Herb Brase, president (for the fifth time) of the one hundred twenty-member Minnesota Dahlia Society. “They are such a stunning flower grown right.” Brase, who grows over 160 dahlias in his Roseville garden, should know something about stunning dahlias—he won the American Dahlia Society’s National Championship Award for Best Dahlia in 1999. “At any dahlia growing competition, flowers are judged on the basis of perfection—perfect bloom form, if the flower is perfectly round, and how perfect the petals,” says Brase. Size, however, does matter. The same year, Brase also won the Biggest Bloom award, for his Minnesota-grown whopper with a single bloom measuring eighteen inches across by twelve inches deep. (Realize that eighteen inches across is larger than a dinner plate—then try to fathom a bloom twelve inches deep.)

Over four hundred blooming dahlias will greet visitors this September when Lisa Ringer welcomes the public to the forty-acre Two Pony Gardens during her annual open house. The timing of the event suggests another reason why more and more local gardeners are becoming hooked on these fussy prima donnas: Dahlias bloom in the fall, joining the relatively short list of flowering plants that bring fresh color—lots of it—to the garden.

It’s as if these excessive, exotic, brazenly colorful behemoths of the flower world knowingly save the best for last. For those gardening addicts out there who are still seeking that ultimate thrill, growing dahlias may be your final destination.

Growing and Care of Dahlias