Toby and Fluffy Come to Dinner

9-20-2000 — There was a time when only the farmers in our nation sensed and understood the sometimes subtle, sometimes glaring effect nature has on animal and plant life. Now, with so many of us tending personal gardens, it’s often gardeners who are among the first to witness the effects of ecological change.

In Minnesota, we’ve had three mild winters in a row, the last two extremely mild. I’ve heard forecasts predicting we’ll see yet another mild winter in the months ahead. This may seem like grand news to those of us who long ago lost our sense of child-like wonderment at extended stretches of eyeball-freezing temperatures, and six foot-high drifts of snow. For anyone who gardens, however, a look at the impact these mild winters have had on our yards and gardens serves to remind us there is no cause in nature without effect. 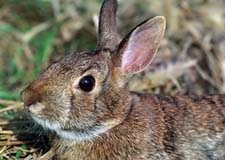 Anyone tired of rabbits yet? Especially big, hungry, healthy ones, decimating flower and vegetable patches with a swaggering glee not seen since our Viking ancestors belched there way through Europe? Blame the mild winters.

Rabbit populations across the state, especially in the suburbs, are nearing an all-time high. It’s safe to say there are more rabbits currently residing in my home town of Deephaven than there were one hundred years ago. One hundred years ago, there weren’t the dogs to keep the foxes out, plus you’d probably encounter a reliable string of bitterly cold winters. What we’re seeing today is the result of a huge proportion of rabbits surviving the past few winters. Not as many are freezing to death, plus they’re able to find food with relative ease under and around a shallower snow cover.

Nature will respond to the problem (what we perceive as a problem; nature views it as a meaningless cycle), but it will take several years. Unless you live in a metro area, expect to see an increase in the fox population in your neck of the woods (dogs or no dogs). An extra fox pup or two may stick around your neighborhood if the rabbit population is higher than usual, instead of the pup migrating away from its mother to stake its own territory. But what can we do in the meantime?

When people ask me if I have a solution for rabbits in their yards, my suggestion is to name them. Then you can at least tell shy Toby, who always arrives stealthily in the lettuce patch at sunrise, from gregarious Fluffy, who frolics with her pals while munching in the annual beds at noon. Mothballs work as a deterrent, but require great skill in their use; you have to throw them extremely hard, and strike the creature squarely in the temple.

Pepper spray works for some, but is time-consuming to apply, since its potency wears off after just a few days, and stops working immediately if it rains. Fencing is the only sure way to stop rabbits from eating up your garden, and is a suitable choice for vegetable patches, but an eyesore in the flower bed. Fencing to keep summer rabbits out need only be thirty inches high.

An increase in the occurrence of pest infestations across our area is also directly related to our recent, wimpy winters. Not enough bug eggs are being killed. Northern gardeners should actually consider themselves lucky; there are insects down south that make aphids look like Boy Scouts. Our cold northern climate usually keeps a lid on insect pest populations, but not recently.

Aster yellows is a devious plant disease that is more in evidence this season than at any time I’m aware. It is spread by leafhoppers, and used to be confined primarily to asters and perennials from the same family. Infected plants look funny, are often dwarf, with buds and flowers appearing deformed and freakish. Within a few months following infection, the plant dies.

Plant retailers in our area have reported seeing plants coming in from out of state that were already infected with aster yellows. Bachman’s Wholesale has disposed of thousands of perennials rather than offer them for sale. Purple Coneflower (Echinacea) has been hugely infested, as has Black-Eyed Susan (Rudbeckia) and even tall phlox. Annuals such as petunia, tithonia and marigolds have also been decimated by the disease in gardens across our state.

Once aster yellows enters plant tissue, there is no treatment. Plants must be pulled out of the garden and disposed of in the trash. The best recourse we can hope for is to witness the glory and wonder of a good, old-fashioned, butt-biting, bitterly brutal Minnesota winter.