4-19-2001 — On Saturday of last week a loud, harsh bell went off across the Twin Cities, front doors swung open simultaneously, and, as if in a prison movie, two million Minnesotans took one step out into their yards. The gardening season had begun. 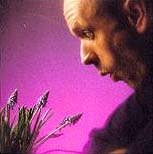 Not that there is a heck of a lot we can do. Now is not a good time to rake the lawn, or even walk on it much. The ground is very wet and a bit spongy, the top few inches fluffed up a bit by winter’s frost, just now dissipated. Any amount of foot traffic packs the soil and squeezes the oxygen from it. Oxygen was drawn into the soil in the last few weeks by the vacuum created as the ground frost reverted back to water.

New gardeners sometimes don’t realize the importance of oxygen in the growing process. There is a whole lot of breathing going on underground, all of it vital to plant health. Oxygen absorbed into the ground is quickly converted to carbon dioxide (CO2) as it comes in contact with organic matter in the soil. Carbon dioxide and water are absorbed by your plants, which synthesize them to create carbons and oxygen, a process called respiration. The plant releases the new oxygen back into the air. One of the wonders of plants is that if the oxygen that started the process in the first place — the air in your yard — was polluted, the respiration process of plants cleans it up and kicks out nothing but the pure stuff at the other end.

Grass plugs are vulnerable right now, so put that rake down. Sure, it seems like a perfect time to make an early start, but raking your lawn before the end of April does more harm than good. Your lawn is just waking up, it’s groggy, there’s very little new root activity, and the roots from last year are wet and cold. Rake now and you’ll tear a lot of your grass plants out. As much as I love tormenting, abusing, and ultimately eradicating grass lawns, I realize that not all comrades share this opinion. Even within the context of Renegade Gardening, the grass lawn serves some purpose (albeit small). Raking now also compacts the soil more so than in May. So wait a few weeks before raking, until we’ve had a patch of bright, warm sun to raise soil temperatures and stimulate new root growth.

It’s just as important to stay out of the flowerbeds. I poked around the edges of mine a bit the other day because I get excited and can’t help it, and get a thrill spotting the pale green growth just barely visible amidst the dead, brown clumps of my perennials.

It’s important to note that most of my perennial beds didn’t get covered with hay, or any type of winter mulch, last fall, as for the first time I threw my hat in with the Gardening Darwinists (GDs). They’re a small, scattered cult, based in Excelsior, Minnesota, who insist that covering perennials with a blanket of insulation in late fall to increase the chance of winter survival is unnatural, prideful, and against God’s desires, the horticultural equivalent to drinking, dancing, and playing cards.

The GDs insist that the pampering of plants is a waste of time. When it comes to perennials, they say if it survives the winter, grow it, and if it dies, don’t. I’m drawn to the simplicity of the argument, and to the fact that one needn’t spend the hours in late November thrashing out ten bales of hay to a depth of a foot on top of one’s garden, or removing it in spring. This past winter was a good test, and I’m already encouraged by what I’ve seen.

Among the survivors of my first-ever GD winter include all my Dicentra, Ligularia, Phlox, Campanula, Iris, Heuchera, Pulmonaria, Delphinium and Sedum, and that’s just what I was able to spy from the edge of the beds. It appears most of my mums probably took it on the kisser, with the exception of my veteran Dooley varieties, which are all showing green. Heuchera, incidentally, doesn’t like winter mulch and is more apt to be killed over winter/early spring because of it than if left uncovered.

Of course what may have worked most prominently in my favor was the fact that we just finished a true, old-fashioned winter, with plenty of snow cover. Guarantee me that we’ll have ample snow cover for our gardens from December through March, and use of marsh hay or bags of leaves as winter mulch becomes a moot point.

So for now I’ll clean up the flower beds and remove all of last year’s growth, careful to step on the flat stones I have scattered throughout the beds, and not on the soil. I’m already dreaming up some design changes, but it’s too early to dig and divide. Until May arrives, I’m just going to poke and putter, thinking great thoughts, but mindful of chewing more than I bite off.