Don’t add too much water when mixing a batch of concrete.

So there you are six years later, wanting to mix a batch of concrete to set posts for the new pergola you’re building, or creating a decorative mosaic stone pad for the birdbath, or mortaring a stonewall. First, buy a steel wheelbarrow.

Then, don’t add too much water to the concrete mix. In the ‘80s, when I was managing home and garden shows, a guy came on the scene for a decade or so, nice guy, Larry Medd, “Mr. Concrete,” hailed from Edmonton, Alberta. He was a concrete/masonry expert and we all booked him to our shows across the US and Canada. Put him up on stage, buy him 12 bags of concrete mix, he’d give the audience great seminars on concrete wall repair, mortaring brick, how to do your own colored and textured concrete patio or sidewalk. Couldn’t set enough seats for him in Des Moines. Farmers wanting to build new silos, understand.

So I heard his talk many times, and adding too much water was his big admonishment. “You don’t pour concrete, you place it, “ he’d say, and, “Your not making soup, you’re making oatmeal.”

Too much water—even just a little too much—makes for weak concrete that will fail prematurely, particularly in regions where you have freezing temperatures in winter. In all climates, too much water leads to flaking and easy chipping of concrete surfaces, such as a stoop or patio. Soupy concrete will flake and the surface will start deteriorating almost immediately after it’s set.

You can’t trust the directions on the bag, where it tells you how much water to add. Manufacturing Portland cement is an inexact science. More from  Larry Medd, on how to keep the terms cement and concrete straight in your head: “Cement is to concrete as flour is to cake.” 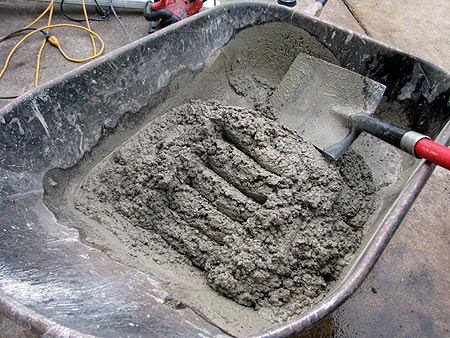 Here’s an aggregate batch that’s perfect, I can readily chop 2” to 3” steps into the concrete. Attempting to chop 5” or 6” steps into it, the concrete would slump to about 2”.

Get the inside of the wheelbarrow wet, add your concrete mix out of the bag, wear gloves, and create a wide, round crater in the middle of the dry mix. Add three-quarters of the recommended water, mix it up, and see what you get. If you are mixing only a few bags in the wheelbarrow, those big concrete hoes are not necessary. I use a straight edge shovel, works fine. Constantly scrape the straight edge along the bottom of the wheelbarrow to be sure you are turning over all the mix.

You’ll usually be a bit dry, you can see some of the powdery cement hasn’t absorbed any water, and the resulting concrete is not at all fluid. Now, the important part: Add additional water A VERY LITTLE BIT AT A TIME. No more than a cup or so. Work it with your shovel again. Really work it, front to back, side to side. Need a bit more water? OK, but a very little bit, at the end of mixing a proper batch, the final amount I add might be a tiny splash with the hose.

A standard bag with aggregate (high content of small, round pebbles) should have a little less slump than a mix that includes only sand, such as a patch or filler mix.

A good aggregate mix will perform as described in the photo. When you have it right, you will see a quarter-inch wide ring of very watery mix all around the perimeter of the wheelbarrow, everything else will have some texture to it. If you want to geek out on this topic, Google “concrete slump test.”