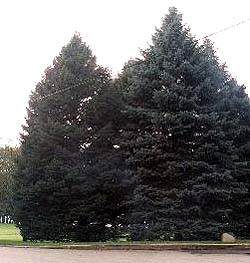 Get in you car, right now, and drive around your neighborhood. Between fifty and seventy percent of the pines, spruce, fir and other evergreen trees you see will have had lower branches cut off by homeowners. Perhaps you didn’t even leave your driveway.

Never cut a healthy limb from an evergreen. I have never seen a tree treated thus that was not in some state of decline as a result. Cutting lower limbs off spruce is the worst offense. Spruce are designed so that the lowest branches, those that touch the ground, support the branches above, and so on, all the way to the tip of the tree.

We cut the branches off around the base – I don’t know why, it’s usually a guy thing, the man of the house needs to show the world he can grow grass under there – and when winter comes the snow load collapses the branches. No problem, the branches are designed to lock together for support. Except down at the base there’s no branches, so the lowest branches are stressed or crack because they have nothing to lock down onto. Then in a year or two, those branches die. 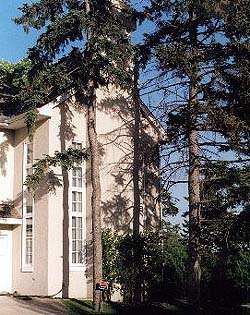 Cutting healthy branches off a pine exposes the tree to insect and wind-born fungal disease. You’re also cutting off the leaves – that’s what the needles are, leaves in needle form – that the tree relies on for photosynthesis. Removing limbs with healthy needles is the same as you losing blood.

Oh, I know the big cause for it. It’s the idiot who lived in your house twenty years ago. Planted a red pine six feet from the edge of your driveway, and you thought it was magnificent until its lower limbs grew so wide they started scratching the side of the Lexus. So we make the limbs go bye-bye.

What you should do is cut the tree down. That’s right, the only time it’s correct to prune an evergreen is when administering what we refer to in Renegade Gardening as, “The Ultimate Prune.” Cut it down, plant an evergreen that is going to fit there in 30 or 40 years. Or cut it down because it’s a dumb spot for a tree and don’t plant another one. That red pine could have grown from seed, it served a purpose for awhile, but now it doesn’t.

Clear out your spruce that have had all their branches cut off up to ten feet on the trunk. Look at them, they have dead branches you can no longer reach, they were planted too close together, now they’re dying, and they look like hell. Replace them with an entirely different landscaping scheme, perhaps some pyramidal evergreens, and a collection of deciduous shrubs.

Be aware that spruce are presently having a tough go of it all across the country. Cytospora canker is a fungus wiping out Colorado spruce, but can infect all spruces, red and Eastern white pines, larch, fir and hemlock. The cankers release a resin that turns bluish-white on the bark of limbs. Needles turn yellow, then brown, and the limbs die, usually from the base up. Rhizosphaera needle cast is also a fungal disease, and is easy to diagnose – needles turn brown and drop, but only second year growth. New growth is green, such that branches looks dead except for green at the tips.

There is no treatment or cure (see “The Ultimate Prune,” above) for either disease, with the exception of having a tree service spray for rhizosphaera needle cast, but only if you catch it right away. So the best way to avoid these problems is to maintain healthy, well-watered, fertilized, properly spaced trees. With all their branches.

Well, there I go, 616 words in fifteen minutes. Sorry it’s so long, I didn’t have time to make it shorter (Benjamin Franklin). Maybe next time.