Enough people ask me the question, “Can I divide shrubs?” that I must assume some try before asking. If you’ve ever wondered about this, well, the answer is no, you can’t. If you’ve ever tried it without first asking someone, I think you probably discovered the same answer.

I admire and applaud the gumption—after all, we divide perennials, don’t we? Yes, of course. The big difference is that perennials are herbaceous, the definition of which is, “non-woody, in which the above-ground portion of the plant dies down to a rootstock at the end of the growing season.” The term is chiefly applied to perennials, but by botanical definition it also applies to annuals and biennials. 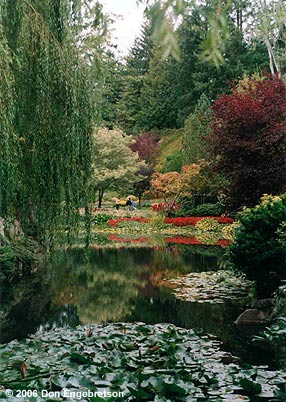 Not really relative to this discussion, just a nice photo I found going through some old boxes. Butchart Gardens , I’m sure, Vancouver Island , British Columbia.

Shrubs are different animals. By definition, they are woody. Deciduous or evergreen, what you are dealing with is a woody shrub. The above ground portion does not die at the end of the growing season (with the exception of the Floral Carpet Rose, but again, let’s not get into that). Shrubs have a woody root system.

Essentially, digging up a dogwood or a ninebark or a globe arborvitae and chopping or sawing the thing in half or thirds and replanting, the shrub just can’t take it. Shrubs are much bigger engines than perennials. Think of it as a thing that gives off much more energy. It gets its energy from its root system. Start tinkering with that root system, cutting it in half, and even though the halved root system only need supply energy to half a shrub, it’s too much shock for the plant (even if you prune some of the top growth). Shrubs are slower moving animals than perennials. Shrub divisions die before they can fix a faulty root system.

I suppose there are some shrubs that one could divide and stand a reasonable chance of having the divisions recover. We’ve all dug up an old, woody, lousy looking spirea clump that’s loosening boulders in the retaining wall and tumbling them down onto the patio, and if you dig them up with a perennial fork, an elderly spirea will break up into about eight different divisions, each with roots intact. Throw a division in a hole somewhere and water it, it will often come back (not that you’d want it to). And I bet if you took a young, multi-leader arborvitae and cut it in half, with proper care, you could nurse both halves back to health.

But a divided shrub will never look decent again. A perennial fills out, it returns very soon after division to the proper three-dimensional form. A deciduous shrub will always look hacked up—most don’t regenerate from the base, as do perennials. Even if it’s a suckering shrub, suckers won’t form on the torn half. And an evergreen shrub will pretty much never fill in on the divided side, were it to live.

If you want to propagate a shrub, learn techniques such as layering, and propagating from tip and root cuttings.

In terms of division, consider shrubs as you would trees. You don’t ask the question, “Can I divide a tree?”