Don’t leave short stumps at the trunk when pruning branches from trees. 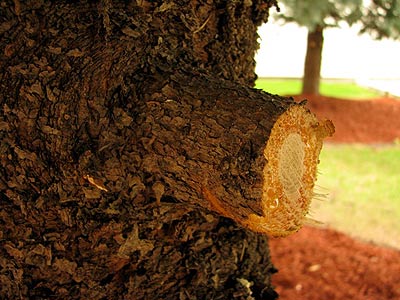 Learn to prune branches from trees. There’s no excuse not to know how, with the Internet at your fingertips, combined with this brief tutorial.

Pictured are some spruce trees near the Renegade Gardener’s secret lair that were pruned last fall by a landscaper. I know, because the pickup truck that showed up for the job had a landscaper’s name on the door. The two guys who trundled out from the cab didn’t know how to prune dead branches from evergreens.

Every prune, they left a stump of branch ranging from a half-inch to two inches long, as shown in the picture above. In the years to come, the dead stump of the branch will rot, and it will rot into the tree interior, leaving the tree open to fungal disease and insect problems.

In the picture at right, I took a key and scraped a lighter line in the bark, closer to the trunk, showing exactly where the prune cut should have been made. They came close on this one.

When you look closely at the point at which a branch meets the trunk of a tree, you will notice a rounded base on the trunk known as the “collar.” It’s not right flush with the trunk, it’s more a circular hump that surrounds the branch where it meets the trunk. It’s apparent in the second photo, though it’s not a large one. Prune branches from trees so that the collar remains intact, but no length of branch protrudes from the collar.

Sometimes, particularly with older deciduous trees, the collar is quite pronounced, and may bulge out an inch or more from the trunk. Fine. Prune the branch, leave the collar. Sometimes, the collar curves – it does slightly in the second picture – meaning you need to spend some time with the saw, possibly sawing partway from the top, and then from the bottom, because the first angle of your cut from the top would wind up removing portions of the collar as you get halfway through the branch.

Or, just be a sloppy pruner as were these “landscapers,” leaving an inch or so of branch, because then, you don’t need to match the curve of the collar. By the way, painting or sealing pruning cuts with any product sold for that purpose is not necessary, and in fact, is no longer recommended. Properly pruned, the tree will heal itself, right tight over the collar, and resume its normal sap flow without much struggle.