This is by no means a scoop. These two Barberries have been labeled as invasive in twenty states, and the time has come when I join the cadre of purists calling for the cessation of nursery sale of these two types of very attractive Barberries. If the call on other invasive garden plants such as European Buckthorn (Rhamnus cathartica) and Princess Tree (Paulownia tometosa) had been made earlier, they wouldn’t be upsetting plant and wildlife habitat across three-quarters of America.

It’s a pity. Japanese Barberry varieties include all the cool ones, ‘Burgundy Carousel’ and ‘Helmond Pillar’ and ‘Golden Ruby.’ European Barberry is not found in the trade much, a low-growing form that hasn’t been cultivated for snazzy colorful foliage. Still, all are to be avoided. 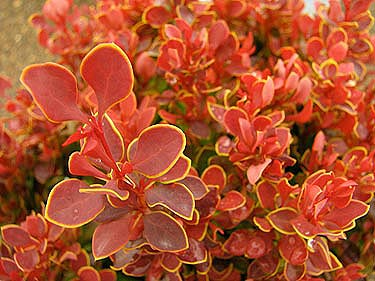 As with all invasive plants that start out as our allies, Barberries have proven adaptable to a wide variety of growing conditions – full sun, shade, open spaces, woodlands. They are drought resistant, a nice quality for a landscape plant but always an evil trait when found in any non-aquatic invasive.

How do they get into the wild (keeping in mind that “the wild” is as often that nice little patch of wooded parkland down the street)? People plant them in their yards at the edge of woods, or bordering some other type of public or private, natural area. Branches touching the ground can root to form new plants. They slowly get away.

More often, it’s the fruit. As one would guess, Barberries bear berries. Birds and other wildlife eat the berries, which contain seeds, poop them a mile or more away, often into the wild, and up pops a new Barberry. Barberries produce high numbers of seeds, with a germination rate of around 90%.

In the wild, these small, fiercely hardy shrubs take over, crowding out native plants and reducing vegetation used as food and shelter for all manner of wildlife. They are particularly tough on deer populations, as deer don’t like to chomp on the tough, woody stems containing prickly barbs.

As I said, it’s a pity, but the Renegade Gardener is officially saying “no” to Japanese and European barberries for personal use and in my landscaping business. It will take at least five years for the nursery industry to follow suit; outright, governmental bans on nursery sales tend to dawdle. In the meantime, you can do your part by no longer purchasing them.

Most upsetting is I’ve now lost one of my favorite lines from one of the tree and shrub talks I give to the public. Barberries are essential, I have told audiences many times, for planting anywhere neighborhood kids in shorts in summer can be found rooting around your landscape searching for errant balls. To keep small, near-naked kids off your property, plant Barberries.