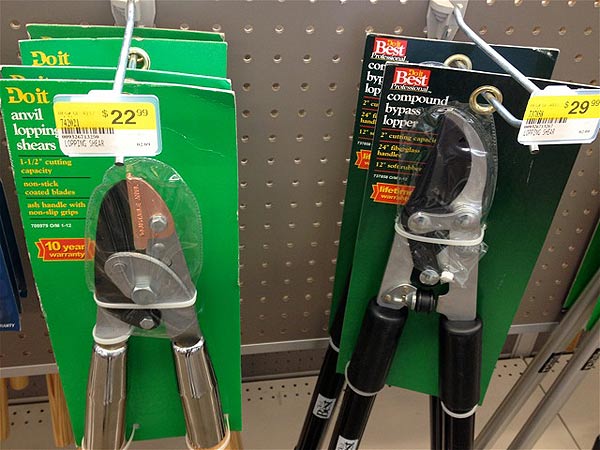 Leave it to the gardening industry, one of the few industries I can think of that continues to offer a cumbersome, obsolete product for sale, simply because the uninformed will buy it.

Anvil pruners were the first type of pruner marketed to homeowners who might be so bold as to consider cutting a small branch from a tree. The design was hopeless from the start, a straight, sharp, upper blade that closes down on a grooved, flat lower piece (I can’t call it a blade, it doesn’t cut). Picture a hammer pounding down on an anvil. Think about how dull the blade gets with each cut.

Now picture – or better yet, dig out that old one of your father’s from the garage and see for yourself – what this type of cutting device does to a plant branch or stem. It squashes it, particularly tender herbaceous stems if one uses a small hand anvil pruner to cut flowers for a bouquet, or deadhead perennials. Use a larger anvil lopper, such as the one pictured, in an attempt to cut small to midsize branches from a tree or shrub, and after five minutes you’ll decide there has to be a better way.

There is. After a time, bypass pruners and loppers were invented, an improved design featuring a curved, sharp upper blade that slices alongside and past a curved, sharp-edged lower blade (picture a scissors cutting paper). Bypass pruners gave a much cleaner and easier cut. The design also allowed the blade to cut off a branch closer to the trunk of a tree or main branch of a shrub. Anvil pruners should have gone the way of suitcases without wheels.

So I couldn’t help but shake my head while in the garden section of my local hardware store the other day. There they both were, a Model T Ford hanging next to a Ferrari 458 Italia. The anvil pruner was a bit cheaper. Doesn’t matter. Buy the one on the right.