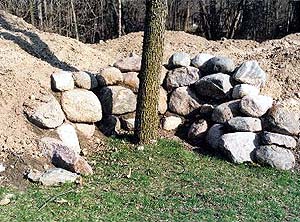 New gardeners often don’t realize how exacting are the requirements of tree roots. Most large trees have broad shoulder roots that cut deeply down into the earth to stabilize the tree, but subsist off the moisture and nutrients provided by the massive secondary and tertiary root system existing in a zone no deeper than six to eight inches from the surface. Why so shallow? Oxygen.

Roots need air. Some are real wimps, like the roots of the silver maple, that need so much oxygen they actually grow at and above the surface of the soil, where we nick them with our lawnmowers. The secondary feeder roots coming off these main roots are only a few inches deep. That’s the way Maples like it.

Raise the level of the soil above these roots and you can kill the tree. Even changing elevation a few inches can stagger a tree (or shrub) and cause it a time out while it valiantly reroutes its feeder roots upward, in search of the proper root level. Home builders have been roundly chastised for saving mature trees around the lots they develop, then raising the soil level as they excavate such that the trees die later on. Even compaction of the soil around trees, caused by heavy equipment, can weaken and kill a tree. Why? Compaction squeezes the air out.

The homeowner who decided to install a five-foot berm surrounding two-thirds of the tree pictured has probably killed this tree. About a third of its root system remains where intended, but that may not be enough. The tree will receive quite a jolt this summer – try cutting your food and water intake by two-thirds, and see how you feel in a year. Thus stressed, the tree will become susceptible to disease, which will probably finish it off some years down the road.