Don’t use rock as a ground cover around trees and shrubs.

Half-inch to two-inch rock – often touted under the name “decorative rock” – is the worst possible choice for covering the ground around plant material for a wide variety of reasons. 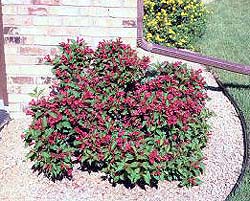 From a horticultural standpoint, it’s deadly. Rock heats up, then retains the heat, frying the roots of the trees and shrubs it surrounds. Often, landscapers would lay down black plastic first, cut a hole in it, and plant the shrub. Now you’re heating the roots, plus suffocating and killing off the soil under the plastic. Trees and shrubs mulched with rock never thrive. Those shrubs in the pictures have to be first-year plantings. 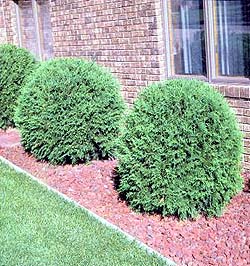 Try to rearrange a landscape that has been covered with rock, dig up a plant, move stuff, plant something new – there’s no use even trying.

But by far the biggest problem with rock is that it looks like hell, particularly in the north. What are we trying to recreate here, Palm Springs? Tucson? It’s such an unnatural, vile, ’60s look. It makes our landscapes look so clinical, so artificial, so phony and laughable, like a drawing from the ’40s of what a city will look like in the year 2000.

The classic is the tree – almost always a birch – sitting alone in the middle of a front yard, circled politely by black edging, the circle filled in with white rock. Please.

If you are unfortunate enough to purchase a home circled by “decorative” rock, your first order of business is to dig it all out and have it hauled away. Or rent a Rockvac. Then plant shrubs and other material that are going to fill in and look natural. Mulch the ground around the plants with shredded hardwood bark. Don’t ever lay down black plastic first. Even a landscape fabric that lets water through will come back to haunt you in ten years. Use four to six inches of bark, and weeds won’t be a problem.