Unless a formal hedge, don’t control the height of deciduous shrubs by topping. 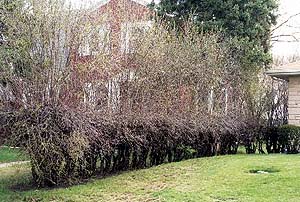 With most shrubs, it backfires. When dogwoods, viburnums, euonymus, cotoneaster, you name it, get too tall, the homeowner will often give the shrub, or hedge, a one-time haircut, right across the top (“topping”) in a effort to reduce the height. Works for about twenty minutes.

Then the shrub responds by sending up five, six, eight new branches straight up from the tip of each branch that was pruned. The haircut activated a hundred dormant buds, and now that shrub is really ready to fly.

You wind up with old wood and decent stem form erupting with thick, tender wood that will quickly grow two to five times taller than the length of branches removed.

Looks like hell. The way to prune deciduous shrubs is to remove old wood at the base, no more than one-third of the oldest growth per year. You’ll get new growth from the ground that will keep the shrub looking nice. But for most shrubs, you can’t effectively control height.

In a formal hedge scenario where you are clipping and snipping four or five times a season, and the shrub has a relatively fine branching habit, such as a boxwood, you use the new growth to your advantage. You are constantly keeping it under control and letting the new growth provide lush foliage. It works with a viburnum hedge, or a dogwood hedge also, but the key difference is you are sharply pruning the tops (and sides) quite often during the season.

Do it once because the shrub(s) was getting a little taller than you liked, and you’ll get far more than you bargained for.