Ooh, ooh … this is a real scoop, and I’m not kidding. Probably less than 100 people in the nation know what I am about to tell you.

The “Maxi-Mum,” the University of Minnesota’s entrant into the Plant Freak of the Century competition, is no more. Kaput. Finis. See ya. 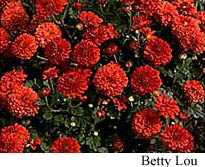 In name, at least. Ball Seed Company just bought all rights and patents from the U., and are burying the Maxi-Mum moniker. I was not told the new name, but Ball will mass-produce and bring it back into the nationwide market next season. I don’t know if ‘Betty-Lou,’ the one cultivar released by the U., will retain that name, either.

In case you’re not from around these parts, the Maxi-Mum is a giant, shrub-like mum developed over the past ten or twenty years at the St. Paul campus. The thing gets four feet high, with an equal spread, pure Chrysanthemum (I refuse to say Dendranthema) through and through.

This is cool for the U. It means big-time bucks, a major score, and the folks at the University’s 70-year-old Mum Project are to be commended, because this type of sale creates funding for years to come.

Now if we can just work toward developing true hardiness with what we have, instead of always laboring under the assumption that bigger is better. I need a four-foot mum like I need another 80-year-old oak.