“A compost pile needs to be turned and watered regularly” 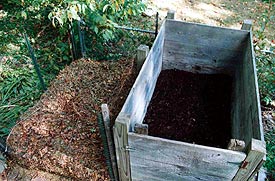 I can’t imagine gardening without access to the one to two yards of black, crumbly, sweet-smelling compost I have available to me in my compost bins on any given day. Yet when I ask gardeners if they compost, only about thirty percent say they do. (Funny, invariably they are the more successful gardeners).

Most gardeners who do not compost mention to me that they think it’s too much work, having read somewhere that to make compost you need to turn it with some regularity, and keep the pile moist when it dries out. It sounds like a bit of work to them—it is—and they think they don’t have the time.

Fair enough. So start composting today, using a variation of the “dry method.” In my version of the dry method, you build two side-by-side bins each at least 4’ by 4’ (6’ x 4’ is better). Every time you have any yard waste, such as young weeds, dried grass clippings, leaves, shredded Stella de Oro daylilies (it is important to run over dug-up clumps of these several times with the lawnmower, to be sure they die), just toss them in one bin. Don’t worry about “browns” and “greens” or any system of layering. Toss a handful of high nitrogen fertilizer (plain lawn fertilizer works well) on the pile as it gets half full, or don’t. Water it heavily when it gets half-full, and again a few months later, or just rely on rain.

Get one of the bins full, then wait a year. In the spring, after it’s warmed up, toss the stuff from the full bin (it will have settled down to half-full) into the empty bin, spraying it with water if it is very dry. Other than filling one bin periodically during the growing season, this means spending a grand total of about a half-hour per season on the process of making compost. In less than a month, the old stuff you tossed into the empty bin will be finished compost. This is how I’ve been making compost for the past ten years.

If your yard can generate more yard waste in a season than can be placed into one bin, build three bins side-by-side, fill two, then toss the stuff from full bin B into empty bin A, and from full bin C into (the now empty) bin B.

You can even do it with one big bin, 6’ by 6’ is a good size, 4’ x 6’ works, throw all your yard waste in it, and if you don’t add any nitrogen, never water it, never think about it, two years later you’ll find that underneath the very top layer of debris, you have finished compost. This is the true “dry method.”

You might think, “Wonderful, except it takes me two years to have compost!” to which The Renegade Gardener replies, yes, and if you don’t start doing it, in two years you will have how much compost?