“Add gravel to the bottom of containers to improve drainage” 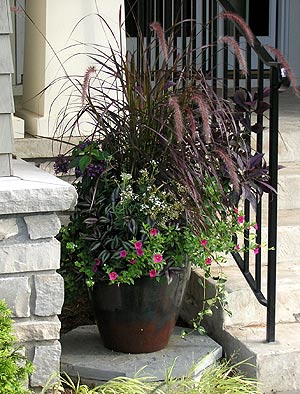 Sure sounds good, and is easy to understand from an intuitive standpoint. Gravel doesn’t hold water—so containers will drain better, and the plants in them will grow better, if we add a few inches of gravel to the bottom of the container.

Not so fast. Dr. Mark Rieger at the University of Georgia has utterly debunked this myth in irrefutable manner. By testing soil water density in containers of different heights, circumferences and shapes, including some into which a gravel base had been added, the good Doctor has concluded that gravel in the base of containers actually keeps the soil in the container (and plant roots) wetter than is good for most plants grown in containers.

A round, shallow container (such as a planter bowl) filled with potting soil holds more water per square inch of soil than a tall container of the same diameter. Makes sense—the soil in the tall container is stacked higher on itself, which will increase drainage, since gravity is everything.

When you add gravel to the base of a container, you in effect “shorten” the height of the soil in the container, thus decreasing the drainage. You’ll actually have better drainage (and the container or potting soil you buy will retain moisture to the exact level it was intended) if you toss a bit of screen or landscape fabric over the drainage hole, then fill the entire container with soil.

Where do I get this stuff? Well, this one is straight out of Jeff Gillman’s new book, The Truth About Garden Remedies, this month’s featured Top Pick!