Perhaps the most obscure, least traveled myth in gardening, but I mention it only because of the conversation I had with a person this summer (and because it’s getting so damn hard to keep coming up with new myths after eleven years of writing this site).

I had just finished a tidy landscaping job for a nice client that involved a renovation of her foundation shrubs and the addition of a new garden bed that ate up some of her front lawn and curled down to the street at the corner of her driveway.

Among the shrubs I placed near the street was one of my favorites, Chamaecyparis ‘King’s Gold’, a low growing, flop-top little cutie. A neighbor came by walking her dog, and offered her assessment. In winter, she pointed out, the snowplows were going to come along and deposit quite a bank of snow onto the new roadside bed. Yes, I agreed, that’s why most of the bed along the street contained perennials, in addition to the aforementioned ‘King’s Gold’, which doesn’t mind in the least being flattened by plowed snow. 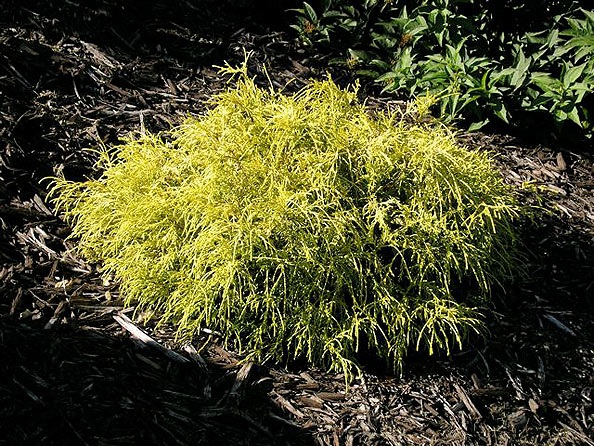 “But it will be completely covered!” she exclaimed. “It won’t get any sun all winter!”

It took me a moment to figure out what exact point she was trying to make. Then it hit me—she thought that shrubs needed sunlight in winter. When it’s twenty below, in other words, and the ground around them is filled with frost to a depth of eighteen inches.

No, they don’t. Nothing does, not mature oak trees, woody shrubs, or evergreens of any variety, shape or size. It’s winter. They are all completely dormant.

Best thing in the world is for your landscape to get so much snow in winter that your plants—particularly your evergreens—are completely covered by the stuff. I used to shovel my driveway and sidewalks and carry the snow over to my bird’s nest spruce, junipers, macrobiota, and ‘King’s Gold’ and try to bury them as best as the snow supply would allow. A dwarf Mugho pine is another good one to completely bury in snow.

All the snow does is insulate evergreens from the bitter temperatures and the winter sun that dries them out and causes their needles to burn and go brown by spring. Get a lot of snow to the point where your low evergreens are completely buried from December through March, and yippee, it means they never will look better the next spring and summer.