“It’s a good idea to add a little lime to your soil at the start of each gardening season, particularly spread on the lawn.” 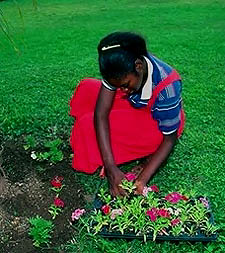 No, it isn’t. Lime is not some super-additive, or magic nutrient that helps plants grow. Lime is not a fertilizer or soil conditioner or a form of organic matter that every soil needs. Lime is merely lime, and depending on its form it is simply several of a variety of compounds of calcium. It is found in deposits all over the world, and can be created in laboratories.

The quality possessed by lime that makes it potentially attractive to gardeners is that it “sweetens” the soil, i.e. it raises soil pH. Now, pH is a hugely complicated science that even the Renegade Gardener barely understands, and I’ve read books on the topic. I even recall being awake when pH was covered in soil science class at the University, and still have a hard time grasping it when explained to me in shampoo commercials. But suffice it to say that soil pH affects when, how and how much the nutrients in the soil (either inherent or in fertilizer) are taken up by the plant.

If you wish to grow blueberries in the north, you need acidic soil, because the blueberry plant needs the micro- and macronutrients released at a certain pH level. All plants are minutely different. Grow flowers in soil that is too acidic, and it’s like the nutrient spigot is shut off. Grow them in soil too alkaline, and the same thing happens.

The number 7.0 is considered neutral, ground zero, neither acidic nor alkaline. Don’t ask me why they chose 7.0. Some scientist was tired of using 5 or 10 as medians, I would guess. These scientists were obviously not card-counting blackjack players either, because the simplest thing in the world would have been to make neutral zero, then go -1, -2, etc., for acidic and +1, +2, etc., for alkaline, a sort of gardener’s Hi-Lo, which would have been much easier. It would also make it so that you double-down an eleven versus the dealer’s ace only if the blueberry plants were dead, and stand on 16 versus dealer’s 10 any year the azaleas bloomed, but enough of this. Here I am at midnight writing humor for the .05 percent of my visitors who are card counters. Of course, if you are a card counter, that was very funny stuff. I am going downstairs for a cup of tea.

Back. Lime raises your soil’s pH. Period. Which pretty much renders it worthless to the Renegade Gardener, and Minnesotans in general. Take a soil pH test anywhere in this state and I’ll bet you dollars to donuts that the soil comes up between 6.5 and 7.5. Around the Twin Cities you’ll find a pH of 6.5 pretty much across the board.

Which is great news. A large majority of everything you want to grow in Minnesota, vegetable, annual, perennial, deciduous or coniferous, is going to do just fine in soil with a pH between 6.5 to 7.0—slightly acidic to neutral. A few things are going to ask that we lower—not raise—the pH, plants such as azaleas and rhodies and blueberries and some conifers.

Meaning there aren’t five lawns or gardens between here and Hudson that need lime added to the soil. Yet last spring, there was one of my neighbors, out mid-morning, gleefully flinging lime all over his yard. I asked him what for. “Lime is good for the soil!” he informed me. It’s a tough job, being the neighborhood plant geek. I didn’t say anything and let him have his way. A little lime wasn’t going to hurt his garden too much. At least I know where to go to borrow a cup of the stuff, next time I need to bury a cat.