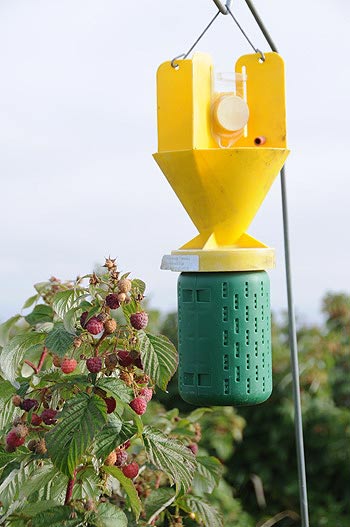 When an adult Japanese beetle locates a plant it likes to eat (nearly 300 genera, and counting), it releases a sex pheromone that can be sensed by its fellow beetles up to one thousand feet away. It’s an insect version of a dinner gong, alerting its pals that dinner is served. Japanese beetle traps contain a small, synthetic dose of this pheromone, often combined with a floral attractant.

These definitely work to attract the beetles. Then, when the trap has attracted some beetles, they get busy releasing their own pheromone, more beetles fly in, and who cares to find the trap? Some do, but the traps attract more beetles than will eventually enter the trap.

The key to controlling Japanese beetles on your property is to kill them when they are in the grub stage, most often in the soil beneath grass lawns. Proper timing of an application of either an organic or synthetic insecticide in spring (one to two applications as needed) and possibly late summer/early fall (if that’s when you choose to start) is the most effective strategy for reducing beetle populations. Be aware that milky spore (Paenibacillus popilliae), one of the organic compounds most often recommended by some for killing Japanese beetles in the grub stage, has been found to be ineffective for that purpose by researchers at Ohio State University. 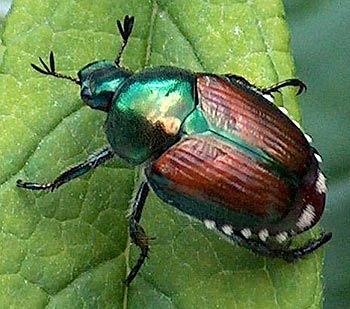 Finally, here’s why you read the Renegade Gardener: Over years of study of Japanese beetles and their control, I’ve never attended a talk or read a consumer article or university paper where the speaker or writer thought to mention what first comes to my picayune mind: So what if you go to all the trouble to control the grubs in your yard, while the neighbor to your left, right, and across the street do nothing? The grubs develop wings, after all, and bear no allegiance to the quarter-acre of turf grass beneath which they were born.

The Renegade Gardener approach is: collude with all your neighbors. Organize your ‘hood. At the very least, exhort the people in your surrounding few blocks to go after their grubs. It will make a difference.