“Organic produce is healthier and has more vitamins and nutrients than conventionally grown produce.”

Sorry, but the falsity of this myth has been exposed at the highest government, university, and private research levels. And after wading through most of it, the facts are clear: Organic produce is not healthier than produce grown using modern synthetic chemicals. 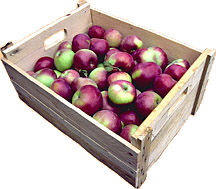 Oh, the more expensive stuff is different. Here’s one of a hundred:

In 2001, Toronto’s Globe and Mail newspaper commissioned research with the University of Guelph. UG conducted 135 tests where they analyzed nutritional makeup of organic produce from a Toronto health-food outlet, and compared it to the nutritional makeup of the same kinds of fruits and vegetables from a commercial supermarket.

It was hard, in other words, to compare apples to apples.

The results of this test, and dozens more, are no surprise to Dr. Phil Warman, an agronomist and professor of agricultural sciences at Nova Scotia Agricultural College. He has been growing organic and conventional crops on a test farm for 12 years, and the results are always the same.

In terms of nutritional content that could lead to a statement that organically grown produce was “healthier,” Warman says, “there is virtually no difference. I know this is disappointing to the organic growers and consumers who have been led to believe that organic food is nutritionally superior.”

If you want to check out studies on your own, fine, but I’ll warn you: The organic industry is five times more active and aggressive than the universities, governments, or commercial growers. Check on the Web and at first you’ll be convinced that eating organic produce will cure cancer, improve your memory, ease pain in joints, and reduce menopause.

But stay at it, and the marketing claims of the organic movement just don’t hold up. “The truth is, there is no scientific evidence to prove that organic foods are safer or more nutritious than conventionally grown foods.”
– Terri Holewinski, registered dietician, University of Michigan.