“Perennials should be divided in the spring.” 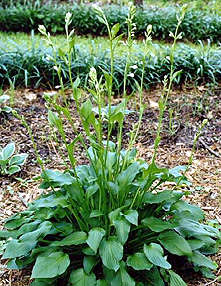 Not an erroneous statement, just misleading so far as it implies that perennials should not, or cannot, be divided in the fall, particularly in the north. Fact is, they can.

Why divide in the fall? Sometimes I like to dig up, divide, and move something in the fall to get a jump on next year. Let’s say that red phlox I planted too close to the front of one bed has been bugging me all summer, and during the course of padding about my little half-acre during the growing season I realize that it would look great if I moved it to fill that space in a different bed over there. But it needs division. So I dig it up at the end of the season, divide it, and replant it, before I forget my brilliant design move.

Hostas are another great example. Start growing a lot of hostas and one spring you’ll wake up to discover every hosta in the joint needs division, and you’ve somehow acquired thirty of them. (I probably have forty or more hostas kicking around my yard, and I’m not a very big hosta guy. Big hosta guys and gals usually have a hundred or more, each of them identified with a plant tag, plus a back-up log on their computer recording the name of each hosta, and where and when it was planted. I typically forget the names of the hostas I plant within a few years, and call every one of them Oreo Margarita ‘William Shatner.’)

Dividing all your hostas in the spring can be a week-long ordeal, at a time when there are much more enjoyable tasks before you. Instead, start dividing them the previous fall, when your gardening schedule isn’t so frantic. You can’t kill a hosta.

We typically divide most perennials in the spring because that’s when they are most vigorous and hugely intent on sending out new roots for the upcoming season. Divide in the spring, and each division gets replanted while in this rooting mode.

But the longer I garden, the more I realize you have to do a lot of things wrong, in the right order, to kill a perennial. Plants are tough. I’ve never lost anything I can think of by dividing in the fall.

In Zone 4, this means dividing anywhere from late August through September. In Zone 3, I’d move this up two to three weeks, and in Zone 2 I wouldn’t divide anything after the first week of September.

Divide in the fall as you would in the spring, water the new division thoroughly when planted, do not fertilize, and do not cut down the plant for winter.

There are some perennials you don’t want to divide in the fall. Anything that fades out to nothingness by the end of summer, such as columbine, is probably best left alone. I don’t think I’d risk it with mums, either. But most of your “divide in spring” plants should handle late summer/fall division just fine.

Of course, there are some perennials that prefer fall division, such as irises, and Oriental poppies (poppies are best divided mid-August in Zones 3 & 4).