“Plants have a pre-programmed height that they grow to.” 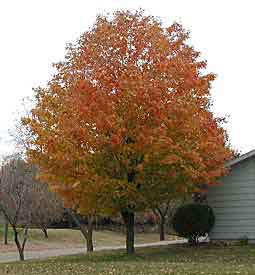 This sugar maple might someday top out at fifty feet. Or seventy-five

Not for one second. It’s surprising the number of encounters I have with gardeners who say something along the lines, “They told me at the nursery that such-and-such viburnum would grow eight feet tall, and last year it hit ten.” Ah yes. It hasn’t stopped growing yet. And won’t until it dies.

“Mature” height figures given for plants are averages, based on observation of the plants grown over their lifetimes. Will a Black Hills Spruce really stop growing once it hits forty feet? Yes—if, within five or six years of hitting forty feet, it dies, it will. If it was planted in a particularly groovy spot, it happened to love its soil, it was well cared for early in its life, and it now rolls on into its sixth or seventh decade having never caught a bad case of fungal disease, it may hit forty-five or even fifty feet. But the average maximum height will be forty.

That’s all any of these height values are based on. They are a bit more accurate and meaningful when it comes to perennials. Veronica ‘Royal Candles’ may top out at seventeen inches in Zone 4, twenty inches in Zone 6, but it’s not going to magically hit three feet if you grow it in the deep south.

But be aware, there are reasons why something like a pyramidal arborvitae (Thuja occidentalis ‘Pyramidalis’) is listed in catalogs with a height range of 12-25’. Some people will see them die in fifteen years, at somewhere around twelve feet tall. Others may enjoy the plant for decade after decade, and live to see it hit twenty-five. Depends on the gardener.