“Spring is the best time to plant a tree.” 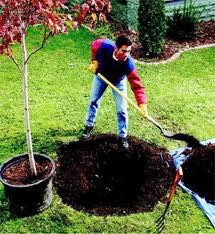 No, actually, spring is the second best time to plant a tree, Arbor Day or no Arbor Day. Fall is best (mid-summer is worst).

Regardless of zone, what occurs in July? High heat and blazing sun. If you plant a tree in early Spring, let’s say mid-April, now count the months to mid-July… one, two, three. Two months if you plant in May. So two or three months is all the time the tree has to recover from transplant shock (which can take a month) and start to grow a root system before facing blazing sun and withering high heat that will continue into August.

Now, let’s plant the tree in fall, say early September. Mulch it, and even in the northern zones, the tree will grow new roots into December (yes). That’s three months of root growth right there.

Depending on zone, the tree will come out of winter slumber by the end of March, or sometime in April or early May. Worst-case scenario, coming out of dormancy in early May, the tree has another two-and-a-half months to grow roots. Add it to the three months of root growth the fall before, and the tree has now had close to six months of root growth before it faces its first stretch of high heat and scorching sun.

That’s why it’s best to plant trees in early fall.