“The Renegade Gardener is Infallible”

Someone on GardenWeb keeps spreading this ludicrous lie, and it ends now. As any regular reader knows, I’ve had my share of bald moments, such as the time I glibly declared that rumors of cocoa bean mulch being potentially harmful to dogs were laughable, noting that my twenty-pound pug had once devoured an entire two-layer, chocolate fudge birthday cake with little more side effect than drinking lots of water and begging for seconds.

An astute reader e-mailed me clips from research showing accounts of cocoa bean mulch causing harm to dogs (rare instances), along with her comments noting the different chemicals found in different forms of chocolate that I duly reported, didn’t understand, and don’t begin to remember. 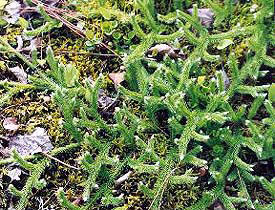 This time around, kudos to esteemed comrade Laura from New Richmond, Wisconsin (sweet little town, and birthplace of my favorite sister-in-law) who has provided us the answer to the mystery of the fabulous native groundcover pictured in an archived article, Lessons from the Wilderness II.

The photo is one I shot during a spring walkabout in the northern Ontario wilderness. I remember devoting at least thirty, forty seconds to my native plant books in hopes of identifying the plant, and then wrote the following:

The early jump I’ve made this year is proving to hold some advantage. Not thirty feet from the cabin I spy a sprawling, amazing groundcover I have never seen before — it becomes hidden later in the season. Needle-like leaves of the softest green are tipped in white along spreading branches that measure five feet out from the mother plant. Is it Crowberry (Empetrum)? I wish I could see it in bloom, if it blooms per se. If the nursery industry ever got their hands on this it would fly off the shelves. Hopefully, like so many plants up here, it won’t grow in anything resembling friable soil, and will remain a wilderness secret.

New Richmond Laura read the article and recognized the plant as the same one she marvels at growing wild throughout the woods of northern Wisconsin. Some ruthless Googling led her to a forest ecologist who took one look at my photo and identified the plant as Lycopodium clavatum.

Empetrum, ha! I’ll fire the man who told me it was an Empetrum. Not only did Laura correct my error, she turned us onto this terrific Web site, of help to northern gardeners on a mission to identify all the magnificent and magical plants we spy when we are out for a wander in the woods: www.botany.wisc.edu/wisflora.