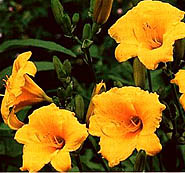 Not in the north it doesn’t. In fact, I don’t believe it blooms all season long anywhere in the country. I sat on an airplane one time next to nice guy from Texas who was an avid gardener, and the two of us became best mates the second we agreed that Stella was one of the greatest boondoggles of all time.

Stella was the first daylily (Hemerocallis) created by the nursery industry that repeated its bloom. Prior to Stella, daylilies would bloom anywhere from June to August, some for as long as a month. But when they were done, they were done. Stella blooms in mid to late June in Minnesota, an entirely unconvincing “pffffft” of small, unspectacular yellow flowers, and then, if you keep it fertilized, grow it in plenty of sun, and deadhead it religiously, in August it will give you a second, even less impressive “pffffft.”

If you completely ignore the plant and don’t deadhead, it will spray out a couple of minor stems with blooms the second time around.

That’s all the nursery industry needed. “Blooms all season long!” proclaimed the press releases and magazine ads. About its second year on the market, the single most-purchased plant in America was the Stella de Oro daylily. The public went nuts, not over the plant, but over the promise that this daylily bloomed from June to September. Landscapers bought them, and still buy them, by the semi-load. Any daylily you see in any commercial landscape is a Stella.

Two weeks ago, I am not making this up, I was walking down the sidewalk of a little strip mall/office complex in Deephaven, and a landscaper was busy planting a triangle area with daylilies. I said, “Stella de Oro!,” bent down, picked one up, looked at the plant tag, and of course, was correct. “Wow, you’re good!,” said the landscaper. No, I’m not, your industry is inane.

When it isn’t blooming, Stella gives you extremely unattractive, reedy, narrow leaves that look like Siberian iris without the iris. It’s essentially a worthless perennial. Thank god it doesn’t bloom all season long. You can do better. There are at least 30 gold/yellow daylilies out there that are more attractive. The lesson here is never be afraid to question industry hype. Just wait until I have time to write about the Flower Carpet Rose.