“Trees roots can grow into a house foundation and cause damage.”

With some frequency I encounter homeowners concerned because a mature tree on their property was planted quite close to the house (usually by a previous owner). They are worried that the tree’s roots are going to grow into the foundation and cause it to buckle or crack, then possibly be further damaged by roots growing into these cracks.

Tree roots can cause damage to house foundations, but not in the manner above.

First, let’s address the concerns of homeowners in possession of homes with basements—Midwesterners, in other words. (Being from Minnesota, I believe I was in my mid-40s before I discovered that not every home in America has a basement.) It’s not the strength of the tree root, or its ability to penetrate a poured concrete or concrete block foundation that potentially can cause a problem, because the force of a tree root in and of itself is not capable of performing such a feat.

Foundation problems can and do result, however, from what tree roots are doing in the first place—sucking up water. Unless the soil around the house foundation is very dense and was properly compacted after the foundation was installed, tree roots can cause slumping and shifting of the soil as they draw out water. Tree roots grow larger each year underground, to the point where a mature tree will grow roots so large they may also loosen and heave soil due to their changing girth. It is the combined effect of these two root characteristics that can cause enough of an imbalance of pressure in the soil surrounding a house foundation that it may strain outward and crack.

Root growth will not enlarge these cracks. Tie a hemp rope tight around the trunk of a tree, and in three years you’ll see that the tree is girdling, unable to snap the rope. A tree root finagling its way into a crack in a vertical concrete basement foundation will not be strong enough to jackhammer concrete, or overcome the thousands of pounds of pressure resting on that portion of foundation.

Poured concrete foundations—slabs, I believe they are called—are a different matter. An oak or other large variety of tree planted near a concrete slab foundation (or concrete patio or sidewalk) that grows UNDER the concrete is in the soil unimpeded, and as it gains girth each year it certainly may cause the horizontal pad to be lifted and crack. What happens more often, however, is the root draws water, the soil slumps, and the pad cracks due to not enough pressure from underneath.

I would say ninety-nine times out of hundred, trees in our yards live their whole lifespan without damaging a house foundation. Remember, the length of a tree’s root system can easily be twice the height of a tree, meaning if roots always caused damage, we’d never be able to plant an oak or maple or linden within a hundred feet of a house. 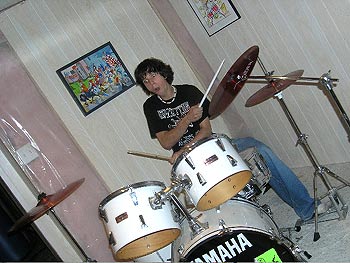 You can ensure against the potential for root damage by not planting trees that get large closer than twenty feet from a house, but you need to go that far away, and farther, so the tree’s crown doesn’t hit the roof. I often plant small trees—magnolias, slim ornamentals—six to ten feet from a house foundation, and will plant dwarf evergreens as close as three. These plants do not develop massive, deep root systems, and are not going to draw so much moisture from the soil around the foundation that it will cause problems.

For mature trees near homes—I have a 150 year-old oak about ten feet from mine—best advice is keep them watered in summer, and keep the shrubs and perennials in your foundation plantings watered. This will keep your soil suitably compacted around the foundation.

A final question to readers in Florida and Oklahoma and California who don’t have basements: Where do you store all your junk? Where do you start your seeds under lights? Where do you put the ping-pong table and the drum kit?