“You always wait for the ground to freeze before applying winter mulch.”

Early on you learn, or should, that you apply winter mulch (if you choose to go that route) such as marsh hay, bags of leaves, etc., to your perennial beds AFTER the ground has frozen. This is often around late November/early December in Zones 3 and 4, the average date for ground freeze (frost penetrating the soil that remains until spring) being December 6 in Zone 4. You don’t mulch gardens to keep the soil from freezing, you add the insulating mulch to keep the ground frozen. 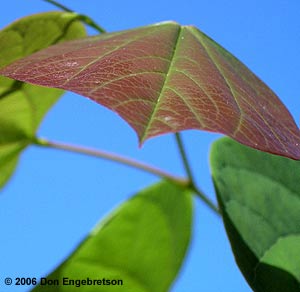 But not when you’re dealing with trees and shrubs that were planted in spring or fall and are now going to experience their first northern winter. Particularly trees such as redbuds and magnolias, and shrubs such as azaleas, rhododendrons, daphnes, quince, and more varieties of “hardy” shrub roses than the industry cares to admit. All the above are hardy to Zone 4, and in the case of shrub roses, there are varieties hardy to Zone 3.

These plants are not exactly “marginally hardy,” but you learn that getting them through the first winter is the trick. After a few seasons they hunker down for winter and emerge in spring quite nicely.

I planted two redbuds (Cercis canadensis) on my humble half-acre about five years ago, both Northern Strain, developed by the University of Minnesota Landscape Arboretum. One was tree form, #10 container, I planted it near the house, the other was a clump form, BB, I planted it on the other side of my property, nearer the street.

At time of purchase they were superb specimens, well cared for by a local grower I trust. I planted them in spring, in late April, which is when redbuds (and magnolias) prefer to be planted. The soil I prepared for each was perfect, good drainage, good organic matter content, and of course I immediately mulched each with a four- to five-inch layer of shredded hardwood spread out to cover the entire planting area. I kept the soil moderately moist the first season, and they flourished.

The next spring neither budded, and by June it was clear both were stone cold dead.

I couldn’t believe it. Redbuds are allegedly hardy to Zone 4, certainly “Northern Strain,” there’s one at the Minnesota Arboretum that’s twenty-five feet tall and must be twenty years old or more. What happened?

I ran it by Gary Johnson, the venerable tree guru at the U of MN School of Horticulture, and he proposed a theory. The winter just passed—their first winter, remember—the Twin Cities received very little snow cover. We didn’t get any decent amount of snow until end of February, March. But in late January, we got our inevitable blast of Arctic air that dropped temperatures down to twenty-five below zero. Some days it was a bit warmer than that, but basically the bitter cold hung in for about three weeks.

Without snow cover (insulation), Gary theorized that the frost penetrated the soil so deeply that it got in around the three-foot diameter circle of hardwood mulch surrounding the trees, then crept underneath, basically freeze-drying the entire root clump of each tree. Had I extended the shredded bark mulch wider around each tree, it still wouldn’t have helped.

Realizing that in this case, the shredded hardwood mulch I had laid down in spring wasn’t enough of a winter mulch to keep frost from penetrating so severely without a helping hand from snow cover, I asked, why not insulate around first- and second-year, dicey plantings with not only shredded hardwood, but a ten-inch layer of marsh hay, applied in early November, before the ground freezes, and applied in a much larger circle around the trees, to keep the frost from penetrating so deeply? Probably would help, said Gary. 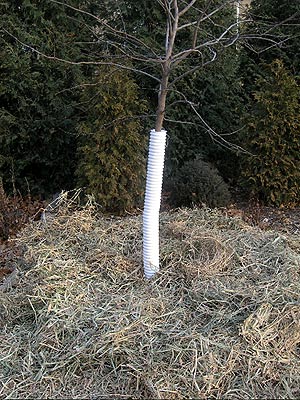 So I dug up my $350.00 worth of copper sculptures, planted two more redbuds, and that fall, that’s exactly what I did. The following spring (and each year thereafter), they jumped to life as soon as the spring sun warmed the soil (I removed the marsh hay in early April).

Now, that’s what I do for many of my “first winter” plantings. In early November, I mulch newly planted shrubs and trees (from the list above) with marsh hay, going out six feet from the plant, if there’s room. And I fluff the hay right up around the trunk, as you would not do with a summer mulch, because the tree is going dormant, and a ten-inch layer of fluffed marsh hay is not going to make it think you’ve raised the soil level.

And the winterkill and winter dieback rate has plummeted. Particularly for shrub roses, that, left to face winter with just their hardwood mulch, may not die, but often, that first spring, experience a fifty-percent or more dieback from winter.

It’s not a bad idea to use this trick in the north for any newly planted evergreen, particularly low growing varieties of junipers, arborivitae, and yews. Mound marsh hay on top until you can’t see the plant. If we receive scant snow cover during winter, winterburn will not occur.

So I’m mulching in these cases not to keep the ground frozen, but to keep it from freezing so severely.