“You can plant ball and burlap (B&B) material without removing the wire cage or burlap.”

Stumbled upon this ghastly practice TWICE in the last few months, both times perpetrated by “professional” landscapers. If alleged pros are still this naïve, I’m betting many homeowners are making the same mistake.

Twenty years ago the theory was that you dumped B&B material right into the planting hole, without snipping off the steel basket or removing the burlap. The assumption was that the burlap would mulch away, and the steel basket couldn’t do any harm. Turns out, only the basket part was true.

Studies by the University of Minnesota and others have found that even after six to eight years, the burlap is still not fully decomposed. More important, after three years in the ground the burlap is barely weakened. In tests, trees were planted without removing the cage or burlap. Three years later they were dug up. In nearly every case, primary and secondary roots had not penetrated the burlap (try to poke a stick through burlap – it’s tough). The only roots managing to grow through were the fine, tertiary roots.

This makes for a very shaky, lethargic tree. Test trees planted this way but not dug up didn’t begin to advance with anything approaching vigor until their fourth or fifth year in the ground. Lacking advancement by their primary roots, they stood still for three years. Some left to watering by nature, died. Test trees planted side-by-side, with cage and burlap removed, grew faster from the start, and after four years were noticeably larger in both height and trunk diameter. 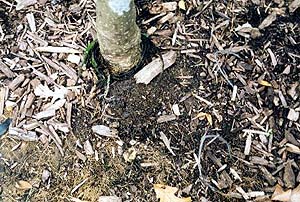 The first photo shows an ornamental pear tree planted four years ago in a landscape I was renovating. When I saw it, right away I noted the telltale sign of abuse (you can see two of the hoops of the wire cage to the right of the trunk). The burlap had to be there as well, because you can’t remove the burlap without first cutting off the cage. Sure enough, it was there, pretty well intact. The landscaper hadn’t even bothered to remove the twine around the base of the trunk, also visible in the picture (and geez, that’s the easy part!).

True to test results, the homeowner told me that the tree has sat like a statue for three seasons. At another client’s house this spring, I arrived a week after a landscaper had planted three, twelve-foot river birch in a neighbor’s yard. Due to rain a few days before, from thirty feet away I could see the steel cage, twine, and burlap poking up out of the ground at the base of each tree. The landscaper had scraped out three holes with an auger attachment on his Bobcat, stuck the trees in, kicked some dirt back, taken the homeowner’s check, and split. This is a thousand dollars worth of trees we’re talking about. 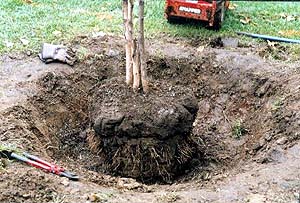 The second photo shows a river birch properly prepared, by me, for planting. First thing I did was dig a big enough hole that I could work comfortably around the root ball. After lowering the tree in, I leveled it by tossing a little soil under this part of the ball and that, until the tree was straight. Next, using a bolt cutter, I snipped the steel cage off as far down as I could reach.

Then I took my serrated knife and removed the twine tightly circling the trunk. Leave it on and it will strangle the tree, until it finally decomposes, or the tree grows over it. Next I cut the burlap in a complete circle around the root ball, at the point where it sat on the ground. Then one cut from the top of the burlap at the trunk down one side to this first cut, and all the burlap pulls off in one piece. Oddly similar to filleting a walleye. (And yes, thusly planted, the root ball is actually smooshing down on a little circle of cage and burlap, not a problem.) 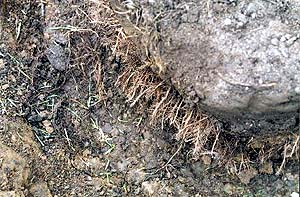 t was late in the season, so this birch had some tertiary root growth sticking out from the burlap, from having been healed in all summer. So I gave it a nice clean root pruning to stimulate growth (bottom picture).

Lastly, I put the soil back in. I had amended the hole and soil with composted rice hulls, because the site where I planted the birch was home to the most evil, demonic, godless, pure potter’s clay (mixed with large rocks) I have ever encountered in my life. Filled the hole half with soil, stepped it in to remove air pockets, watered it, added the rest of the soil, stepped it lightly, watered it again, done.