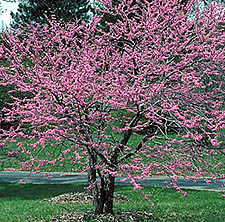 “New” is understandably relative when talking about new tree varieties, I think you’ll agree. Whereas some wholly unnecessary, black-and-orange, double-hung tulip should rightfully be considered old-hat its second year out of the gate, fabulously hip trees developed for our northern climate easily retain the “new” label for at least a decade, so says I.

That’s why I’m featuring Cercis candensis ‘Minnesota Strain’ — Minnesota Redbud — in this week’s New From the U.

This spreading tree is native to areas of the United States south and east of Minnesota, but with variable winter hardiness, few large specimens grew in Minnesota prior to development of the ‘Minnesota Strain’ variety, a project the underpaid University of Minnesota Master Zen Tree Geeks started working on in the 1960s. In 1992, the U allowed ‘Minnesota Strain’ out of the bag, and into the commercial market.

And lordy, what a tree it is. Redbud may be the perfect ornamental.

In bloom, it is the most spectacular plant you could ever see, rivaling tropicals for bash and sass. The dark pink/purple flowers this hummer unleashes in early May (prior to leafing, like some magnolias) will draw the attention of every neighbor, stranger, and local newspaper photographer in your town.

The tree tops out at 12 feet, meaning you’ve got a spot for one whether you live in the city or countryside. It has an open-spreading, multi-stemmed habit that gives it an architectural/sculptural presence all year ’round.

Why the ‘Minnesota Strain’ Redbud is not more popular in the nursery industry is unclear, although the tree has definitely been getting more word-of-mouth in the last two years. People who have one can’t say enough about them.

The tree prefers full sun but grows and blooms quite well in part shade.

Of course, perhaps no tree is truly perfect. It’s hardy only to Zone 4, I’m afraid, meaning I’ve just spent two minutes dashing the hopes of all you fine visitors from northern Minnesota, and the Zones 3 and 2 elsewhere around the world. I’ll see if I can’t find a small ornamental tree almost as spectacular to write about, in the seasons ahead.